Go wild in the country


I had a really interesting day today at Stirley Farm with many of the Growing Newsome gang on a training session entitled 'Discovering Wild Food'. The course was run by Chris Bax and Caco of 'Taste the Wild' who run wild food and foraging courses. The idea of foraging is not to replace your weekly shop by scavenging around the countryside but to increase peopes awareness and connections with the local  environment around you by having knowledge of food that you can use in cooking that could be growing on a verge in a hedgerow or a local field. Chris was clear that the rise in interest in local food has been fuelled by the television programmes of Hugh Fearley Wittingsall and Ray Mears. There were a good dozen or so folks, mainly from Newsome, on the course and everyone seemed to enjoy learning about wild food on a sunny day around Stirley. The use of nettles, rosebay willow herb and sorrell were all explained and I'm looking forward to feeding it to the kids! Here's some pics from the day.

Posted by Andrew Cooper at 20:14 No comments:

Rise of the swivel eyed ones 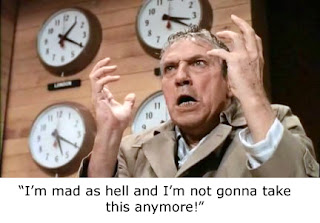 We don't know who it was (or wasn't) but someone called (or didn't call) some Tory activists 'swivel eyed loons'. Well if they did they were right in many instances. The obsession with European Union membership, climate change denial, despite no real scientific backing, moral outrage at gay marriage and a belief that all wind turbines are the spawn of Satan are all characteristics of the 'swivel eyed'. Some of these characters seem to be in a permanent state of anger about the wrong things. They are usually so opposed to what they regard as 'political correctness' that they make a virtue of being politically wrong on most issues. Throw into this mix the rise of UKIP (where being swivel eyed is a condition of membership) and you have a potent mix of rabid Tory activists, posh Tory grandees born to rule and a Party which welcomes the deluded with open arms. They can go to UKIP Conferences and presumably be as offensive as they like without anyone raising an eyebrow so long as they're a bit discreet about it. Quite a few of their new Councillors have recently failed the discretion test and are now being taken to task in the media.

There's probably about 3 or 4 potential Tory Councillors in Kirklees who I could see jumping on the UKIP bandwagon on the basis of their 'swivel eyed ness'. In many ways these defectors would probably save the local Tory leadership a lot of hassle. More significant for the Tories would be the defection of people who feel overlooked by the grandees, who see others, who they regard as having less ability being promoted over them - a couple of characters in the Lords who have somehow achieved ministerial rank immediately spring to mind. Even more damaging still would be the loss of the saner grassroots Tories who may just feel that Central Office has just lost the plot.

What I find most bewildering about the 'swivel eyed' is the perception that the Tory led government has somehow been held back by the Liberal Democrats. A mouse hanging onto the tail of a charging bull would have more effect at slowing down this right wing government than any number of Liberal Democrat MPs. Now hopefully their own internecine warfare will slow them up, but more likely they'll accelerate to prove how truly mad they are to satisfy certain sections of their rank and file.

This is not the end of this Tory story. A madness is descending. Lets watch.

Posted by Andrew Cooper at 16:10 No comments:

Another terrific Growing Newsome event today. Over 170 people came today to collect seedlings for their allotment plots and gardens. For our plot myself and Karen Allison got courgette plants, sunflower seedlings, tomato plants and other bits and pieces. All this was finished off with a good wholesome vegetarian lunch. Lots of chatting with local folks and plenty of people catching up with each other over a cuppa and home made cakes. Council officers call this 'community capacity building'. It is certainly locally led by a group of committed enthusiastic volunteers who obviously get a real buzz out of doing it. This is the good stuff.


﻿
There's a lot that has been said about UKIP in the last few days, probably too much. How can yet another right wing free market party make a real difference to British Politics. Do people really want another party that wants to make the rich even richer than the Coalition are doing? Will their Councillors who have been elected so easily be any good or do they merely represent a snapshot in time of dissatisfaction with the current larger parties by voting for one which in reality is very similar to them if more unpleasant with a speciality in being against UK membership of the European Union? Any envy here? You bet there is. I very much wish the Green Party were celebrating as many gains in UKIP rather than the steady progress we make at each local election? Our steady progress may be more lasting and sustainable but it is darned frustrating.

What I'll concentrate on is UKIP and climate change. For one thing they don't believe it's happening. They are in the late stages of 'Canute Syndrome' - see earlier post. They fit into the 'climate change is a left wing green theory to damage our economy' camp. Classic conspiracy theory folks with all the contrived unscientific un-peer reviewed 'evidence' to back up their stridently expressed views. "Climate Change? as harmless as smoking in pubs" they might say. This has led to a 'policy' urging Councils to get rid of 'useless Climate Change Officers'. It exhibits a total lack of understanding of the fact that many of the staff with these titles have already been made redundant not because they were 'useless' but simply due to the financial pressures Councils have been under . Kirklees itself has lost many staff in the Environment Unit in the last few weeks. Staff working on climate change don't simply sit at their desks musing about global climate change most would be running programmes to improve the energy efficiency of council buildings, reducing energy costs and saving money as well as carbon emissions. They would be in charge of  projects drawing in millions of pounds of finance to insulate homes saving householders money and tackling fuel poverty.

The UKIP stance on climate change officers is just one example where prejudice drives their policy rather knowledge or experience.  In reality their view on this reflects a lot of Tory grassroots and backbench views and you can imagine a lot of defections of Tory activists who prefer UKIP populism to what they regard as 'political correctness gone mad!" - wipes foam from mouth.

Posted by Andrew Cooper at 21:03 No comments:


﻿
﻿ ﻿ ﻿ I've had a few phone calls asking me why people have not received polling cards and understandably people don't all realise that we only vote in Kirklees elections 3 years out of 4. With 3 Councillors in each ward each having a 4 year term this gives one year in 4 without an election. In the Counties we do have elections but not in Metropolitan Districts like Kirklees. There is however 1 election posterboard up on a lamp column in Kirklees. It is a Labour poster on Colne Road which has now been there for 1 year. I guess they must have forgotten all about it when the Labour campaign left the Newsome Ward after the last local elections and this one got left behind. It is not an unusual phenomonen for Labour to leave a board or 2 behind and I tend to refer to these as Zombie posterboards as they continue to stalk the area long past their lifetime but this one is certainly one with  long life. We were talking about getting it a birthday card and a cake with a candle on it. I did tweet about this board still being up months ago but nobody came to take it down. I guess it will disappear fairly quickly now.

Posted by Andrew Cooper at 21:15 No comments:

If you go down to the woods today

The recent Newsome Community Survey identified litter and mess around the area as a big concern for many households. Over the years the Green Party Team has arranged many volunteer clean ups and also got Kirklees in to carry out. This latest clean up was of Bluebell woods near Taylor Hill. 6 of us did about an hour and got the woods pretty much clear. Strongbow cans seemed to be the favourite piece of litter in the woods. It now looks prety much clear. Nipped in The Lockwood Pub for a quick pint afterwards and crawled in home at around 10.30pm
﻿ ﻿﻿﻿ ﻿﻿﻿ ﻿
Posted by Andrew Cooper at 15:19 No comments: