Recently, writing on the Shepley Village Website, Councillor Armer asks why have the Green Party not discussed the matter of our proposal to help save Shepley Library with him. Well we have specifically asked that he be a member of the Parish Councils Library Committee so he has a say on all proposals that come forward and all our proposals that affect the Parish Council go before the Council for debate and agreement. If Green Councillors have an initiative or a proposal we shouldn’t have to check with Cllr Armer before we go public with them. I’m sure that isn’t the way the other Parties operate and Cllr Armer could have approached his fellow ward Cllrs for information and offered support for their proposal. I think he is more concerned about the fact that we have come up with a proposal and he hasn’t.

We wholeheartedly agree that the campaign to save Shepley Library should be community lead. All we have done is remove an obstacle for them by proposing the Parish Council covers the gap in funding for the Libraries running costs for gas, electricity , cleaning etc. for a to be agreed set period of time. This is a vital first step in enabling them to establish their own Business Plan which will be needed if the building is to be successfully transferred from Kirklees Council to the community of Shepley.

Cllr Armer asks where these funds will come from and really he already knows the answer . It will be an integral part of the Parish Councils budget and that is the proposal we will be making at our November Council meeting. Shepley people pay their Parish precept along with their Council Tax and the Library is a top concern for people in the village so it makes sense for the Parish Council to support it and give some benefit back. The Village Association that is working to save the Library is aware and has been fully informed of our proposals throughout.

Cllr Armer says that I said the Parish Council should fund current staffing levels at the public meeting in Shepley of £50,000 increasing the Parish Precept by £45, in fact there were lots of suggestions at the meeting, but Green Party Cllrs have never proposed that as an option. At the meeting we were all informed by the library management that the current annual running costs of the building, less current income, are in the region of £5000. Our above proposal would amount to an annual cost of £5000/year or less to the Parish Council which we believe is good value to keep the library building open. Cllr Armer knows this as he was also at the meeting, but yet is determined to play his political hand again.

We are very disappointed by the criticism of the Green Party efforts to help save Shepley Library by Councillor Armer and sadly note where there is an absence of any initiative from him and his Party then he resorts again to criticise and knowingly mislead local people. We trust that when our proposals come before the Parish Council he will do the right thing and support them in the interests of Shepley Village and the future of its Library.
Posted by Andrew Cooper at 13:48 1 comment: 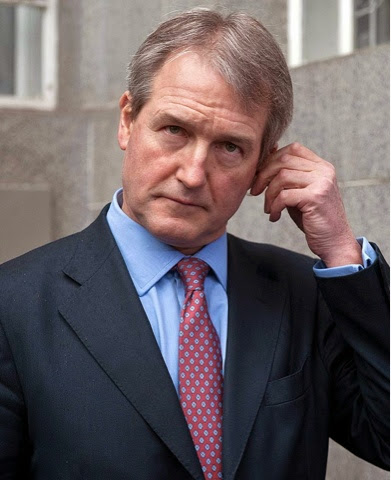 He's a millionaire, ex public schoolboy, climate change denying and a former Tory Environment Minister so I wasn't expecting much from him when he was interviewed on BBC Radio 4s Today Programme last week. Out of the stream of illogical drivel he came out with one statement he made stood out. It was the claim that renewable energy technologies "don't work". It was a bizarre claim that could only be based on ignorance or prejudice but most likely both. If he was right and renewables didn't work then they wouldn't just not work in the UK they wouldn't work anywhere. Of course climate, topography and latitude will all play a part so the UKs wind, tidal, solar and hydro resource give us a huge advantage over many other EU countries. We are however doing very poorly compared with our European neighbours. The EU overall target for 2020 is to have 20% of total energy produced from renewable sources. The UK was given a lower target of 15% to recognise our poor starting point. To date with around 5 years to go we are hovering around the 5% mark. So we're going to fail and fail spectacularly. It is not our climate or latitude or topography that are the principal reasons for this failure it is politics. The faith in market approaches to deliver has simply not worked. A lack of investment in energy conservation and constantly changing policy on renewables coupled with outright hostility from Tory Ministers supported by compliant Lib Dems has meant the 'Greenest Government Ever' has turned out to be even worse than the previous ineffective Labour Government. So using the medium of Twitter I asked if the laws of physics were somehow different in other countries that meant their renewables worked and ours didn't. It struck a chord with some folk and managed 706+ retweets which is a record for your truly. 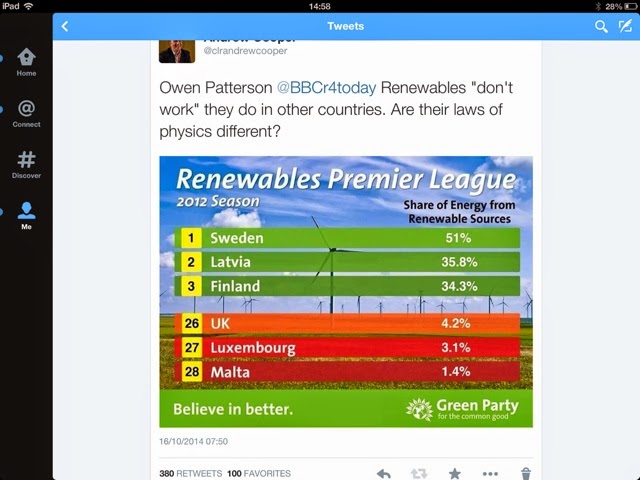 The big unanswered question for me is why did the 'hug a husky' Prime Minister Cameron make this idiot a Cabinet Minister for anything and for the Environment in particular. While at DECC he refused to meet with David Mackay the principal government advisor on energy matters. Paterson is clearly a man who wasn't interested in facts that conflicted with his own beliefs. He seems to have been introduced to appease the Tory right and George Osbourne who for all their hostility and inaction either are, or may as well be, climate change deniers.

Paterson now is marketing himself as a posterboy for climate change denial by speaking at events run by Nigel Lawson's discredited Global Warming Policy Foundation and venting his disdain for green lobby groups by referring to them/us as Green Blobs. His status as an ex minister will mean the fruitcake will still get media coverage but it is a shame that he probably won't get very challenging questions and his views will be given undue credence.
Posted by Andrew Cooper at 09:35 No comments: 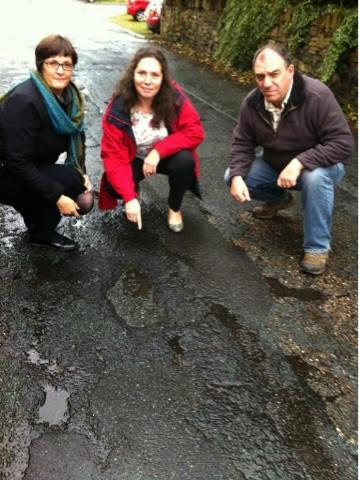 Green Party Councillors Julie Stewart-Turner, Andrew Cooper and Karen Allison have carried out a survey of every street in the area they represent.
“We have looked at over 250 streets in the Newsome Ward to assess the road condition” said Councillor Julie Stewart Turner
“Around £800’000 has been allocated for pothole repairs so we wanted tomake sure that Kirklees were presented with as complete a list as possible. We know there simply aren’t the numbers of Kirklees staff needed to go round every street. We’ve been everywhere from Hall Bower to Highfields and from Lockwood to Lowerhouses and it is clear that we have a seriously deteriorating road network. In tough times Councillors need to be even more active to ensure issues like poor road conditions are not ignored. ”
Councillor Andrew Cooper said,
“Central Government have taken over £152 million out of Kirklees funds and have given back about £800’000 for pothole repairs. Dealing with potholes can only ever be a sticking plaster solution and doesn’t solve the long term issue of lack of funding. People are paying the same amount of council tax and getting less for it while government subsidises  multi billion pound projects like HS2 and the Trident missile programme. Government priorities should be about investing in projects which help peoples everyday lives and the pothole strewn road network is a clear example of the mixed up priorities of the Coalition Government.”
Posted by Andrew Cooper at 17:49 1 comment:

A community lead group in Shepley is being established to work with Kirklees to seek a Community Asset Transfer to ensure Library service remain in the village. Councillor Derek Hardcastle said,

“For Shepley to put forward a convincing case to Kirklees to transfer the building to the community it will need to demonstrate that it has secure funding to maintain the buildings plus costs for water, gas, electricity, cleaning, waste removal costs etc. We will propose that at the Parish Council’s annual budget meeting the Council agrees an amount to be set aside for that purpose. This would help to provide a sustainable long term future for the Library.”

Nick Clegg MUST be allowed to join the Leaders debates!

When I heard only 4 Party Leaders were to be included in the General Election Party Leaders televised debates like many others I was incensed. The Lib Dems were beaten hands down by the Green Party in the last European Elections and Greens gained 3 MEPs to the Lib Dems one but I still believe Nick Clegg should not be excluded from these high profile debates.
The Lib Dems poll ratings are roughly the same as the Greens and this should be enough to ensure that Nick's voice is heard even if polls show them (and UKIP) way behind the Greens among young voters. Admittedly Lib Dems are practically toxic to young voters (my 16 year old son does refer to Clegg as "Cameron's Butt Monkey") but that misses one important function of these debates which is to hold the guilty to account. As the guarantors/collaborators with the Conservative government Clegg needs not only to comment on the future (that he won't be a part of) but also answer to us all for propping up a Coalition Government that has cut taxes for millionaires while reducing the incomes of the very poorest who will never benefit from a reduction in income tax. He could also explain how with one of the lowest percentages of energy generated from Renewable sources in Europe he can still claim to be part of he "greenest Government Ever".
I'm sure some enterprising person will set up an online petition to allow Nick to join Dave, Ed, Nigel and Natalie at the debates but I can't be bothered right now as I'm very busy and only catching the news in snatches.
Posted by Andrew Cooper at 09:48 1 comment: