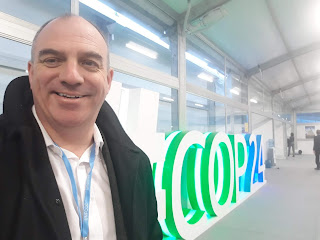 My speech to an event in Leeds today hosted by UK100 the network of Local Government leaders "which seeks to devise and implement plans for the transition to clean energy that are ambitious, cost effective and take the public and business with them".

What needs to change? In 6 minutes.

The short pithy answer is of course lots and quickly. The IPCC Report told us that we have only 12 years to get a grip on carbon emissions as if there wasn’t enough evidence already. What frustrates me is the  lack of urgency from policymakers on reducing emissions. It is like we have all the time in the world and sadly we simply don’t. We are not treating this as the climateemergency that it clearly is.

So housing and specifically new build housing. In July Government told us that Councils could set our own energy efficiency standards in our Local Plans for new housing. That’s good and I am pushing for the Passivhaus Standard in Supplementary Planning Guidance to the Kirklees Local Plan. If Kirklees agrees it and government allows it and  I succeed then that will be one Local Authority out of hundreds. Why doesn’t government just improve building regulations and actually properly enforce them with an independent publicly managed Building Control system to ensure their quality of build and energy performance.

Retrofit housing. We all know that one of our biggest challenges is the existing housing stock and that we need to rapidly improve the energy efficiency of the existing homes to reduce energy demand with all the health and income benefits that would come with that. So we desperately need a mass retrofit programme. The easy stuff has largely been done in terms of loft and cavity wall insulation. It is the solid wall properties with attic rooms that we need to address with internal drylining, room in roof insulation and external cladding where appropriate and we need to aim for the Enerphit standard for retrofit. Yes it needs paying for and a combination of ramping up the Energy Company Obligation and use of general taxation is what is required. We can spend countless billions on HS2 and the expensive dangerous folly that is Hinckley C but wouldn’t it be better to invest those funds in a programme like this that would directly help millions of people, with substantial additional benefits.

We need to reboot and re-energise the mass solar PV sector and give it a sustainable future with no chopping and changing of Government policy every 6 months. This would enable it to be a mass market product again but this time with a strong focus on community owned renewables and energy storage.

The effective ban on onshore wind projects needs to be lifted. It is ludicruous that our cheapest form of renewable energy is basically a non starter and if we do re-energise it we need to encourage more publicly owned and community owned renewables.

Renewable heat and Combined Heat and Power needs to have a much stronger focus from government. I’m not a big fan of the incineration of waste but it’s not just the waste that goes into these that I object to but the waste heat going up the chimneys. Some great work is going on in Leeds and other authorities but it is not the norm. It is not mainstream.

We need to stop subsidising fossil fuels. We hear all this talk from some politicians about the renewable sector having to stand on its own two feet in the energy market yet we subsidise fossil fuels to the tune of £12 billion/year and renewables £8.3 billion/year. The balance is wrong and doesn’t reflect where Government support is needed. Local Government and wider public bodies need to divest from fossil fuels which if we are serious about addressing emissions will become worthless stranded assets (according to the Governor of the Bank of England). Some have already done so, others need to like the West Yorkshire Pension Fund for instance.

I’d love to see a mass tree planting project with large scale civic engagement and I hope the Northern Forest proposal becomes that. Every school child in the UK should be given the chance to plant a tree.

The revolution in electric vehicles needs to be accelerated and Councils and large fleet operators incentivised to act more swiftly with infrastructure and in their own procurement. Leeds is doing well with 200 electric vehicles. Kirklees has 3. Come on Kirklees!

Fracking. We need to keep it in the ground. Ban it like so many other civilised countries in the world have and Scotland.

We need to ensure we do these things but focus on those on the lowest incomes first. We don’t just save the world we must create a better world.

Do all this and it will be a good start

Posted by Andrew Cooper at 19:08 No comments:

Today myself and Councillors Julie Stewart-Turner and Karen Allison visited Hillside Primary School. We've done a few of this visits now to various Primary schools in the Newsome Ward. I'm keen that we demystify Councillors and local democracy to make it accessible, normal and for local politicians to be people they are aware of. So I always enjoy these visits. You always get good questions and views. Thanks to Kirklees staff for facilitating this event. 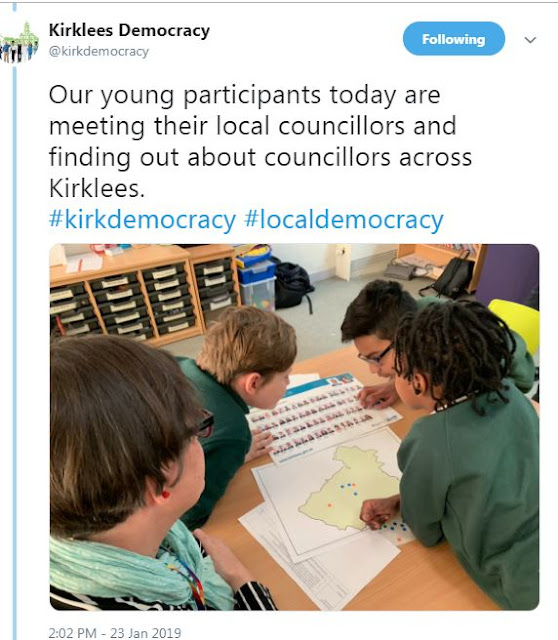 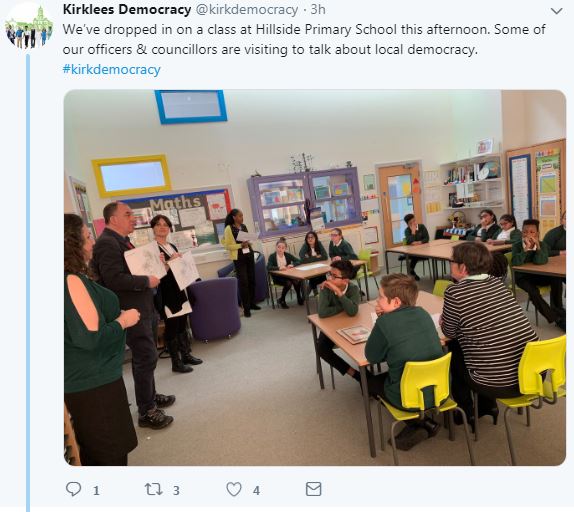 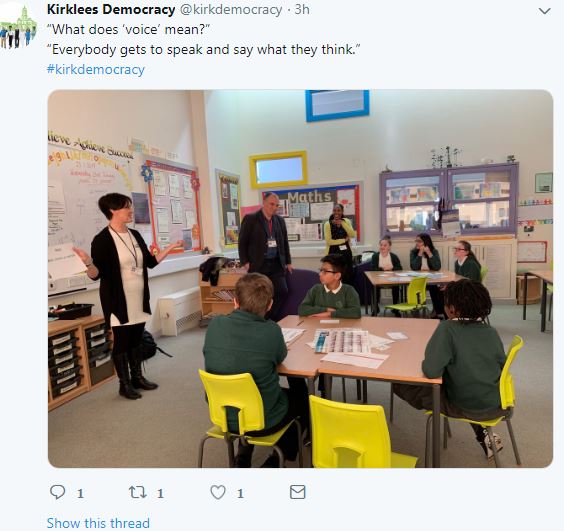 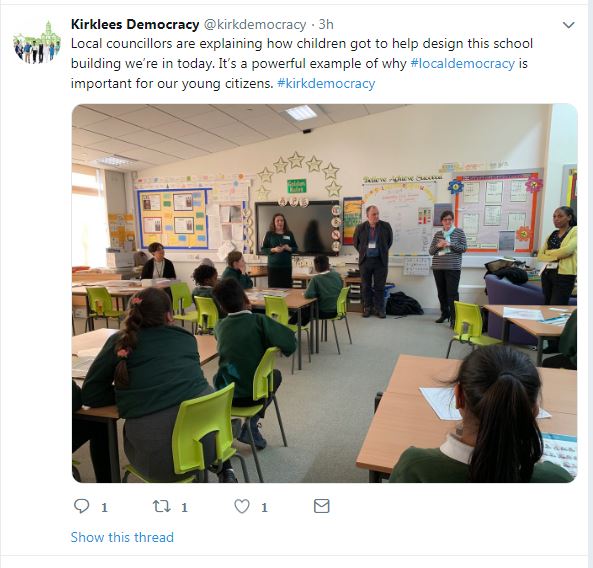 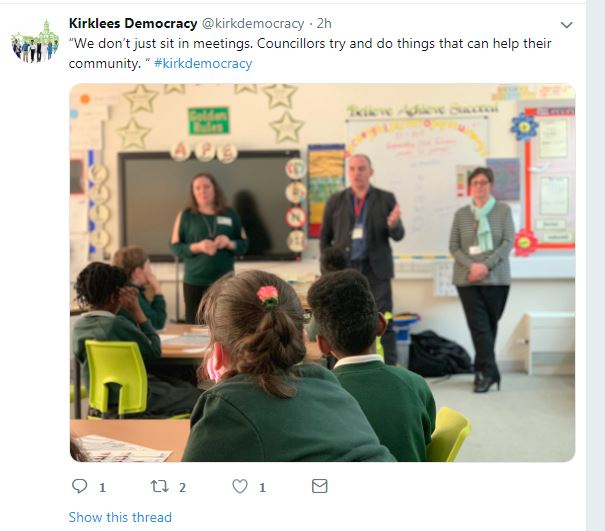 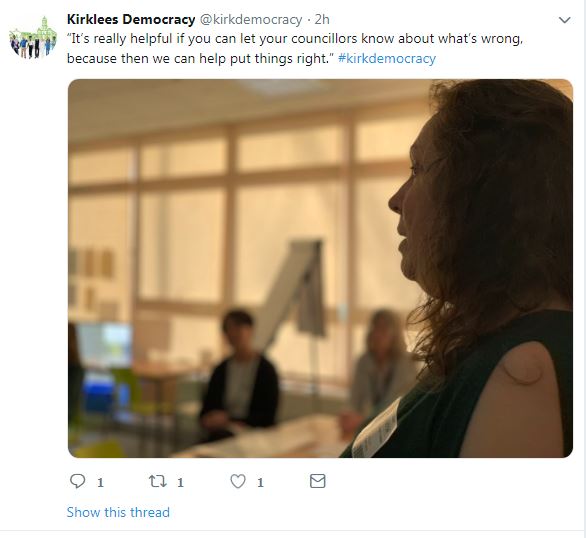 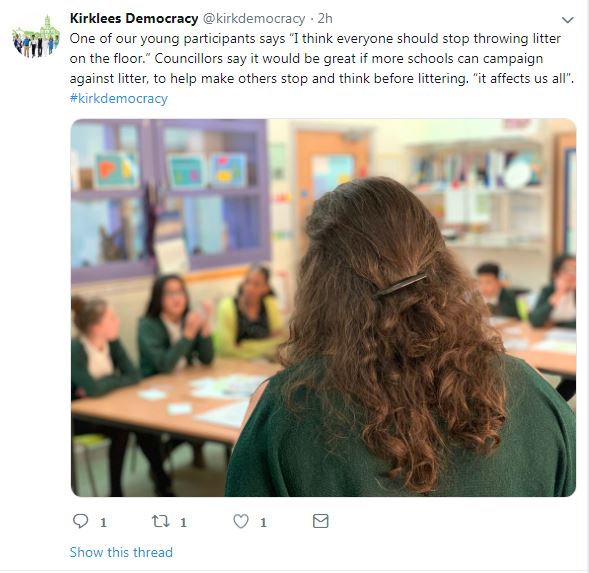 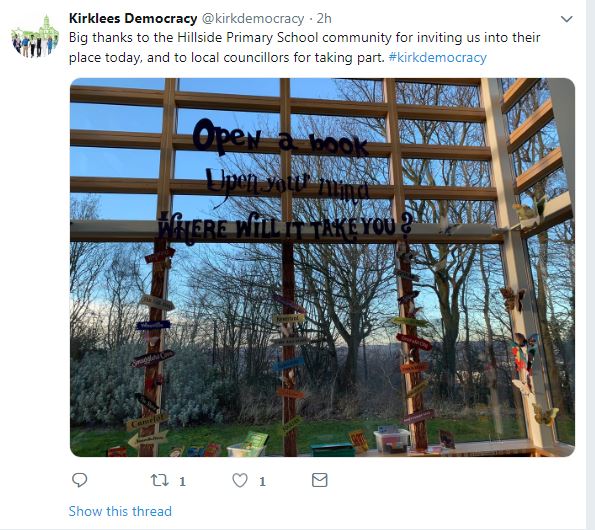 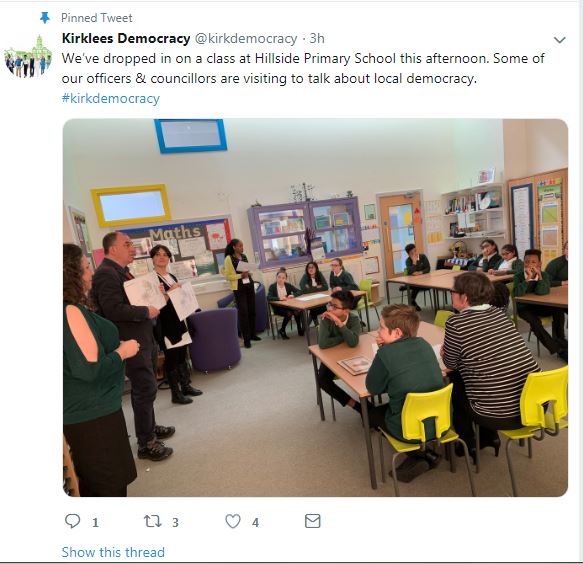 Posted by Andrew Cooper at 17:19 No comments: 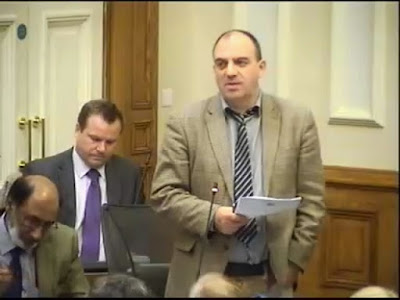 Firstly I welcome this motion to 'Declare a Climate Emergency' and I thank Councillor Murgatroyd for his initiative in bringing it forward. It follows on from a number of other motions by Councils around the country the first one in the UK in Bristol introduced by my Green Party colleagues there and this has been followed by a number of others including Stroud and most recently Bradford Council last night. It is also now a global phenomenon and even Councils on the other side of the Planet in Australia are passing similar motions based on the call to action inspired by the IPCC report.
So what is it all about. We have limited time to act and national Governments are not acting nearly fast enough. I was at the UN Climate Talks in Katovice , Poland last month where on behalf of the EU Committee of the Regions we were calling for National Government’s to work in partnership with Local Authorities to address climate change. So a quick question to members. How many emails , memos, calls for assistance with the Paris Climate goals have we in Local Government received from National Government since it was signed over 3 years ago? You know the answer it is zero.
We are the people with the closest links to communities, who can mobilise action quickly, who have strong links with the wider public sector and business. If we are not properly valued and involved in action to address climate change then we will fail.
Passing this Climate Emergency motion is an important first step but it will meaningless if not followed up by meaningful action. I know recycling is an important issue and does have a relationship with climate change and it is somewhat bizarre that it is the only specific aspiration mentioned in this motion. There is a lot more we could do.
In July this year Government announced that we could set our own energy efficiency standards in our Local Plan and that crucially these could be higher than those set in National Building regulations. On Monday I visited the Navarre Region of Northern Spain where the Local Authority there is currently building 524 Passivhaus accredited homes for social rent. It was inspiring stuff, the people on the lowest incomes having good standard housing with negligible fuel bills. It was good to see such strong leadership. It is not an isolated story and around Europe we now seeing tens of thousands of such homes being built. In the UK we have leading authorities like Norwich and Exeter doing some successful groundbreaking work on Passivhaus developments. In Kirklees it has been a bit slow. The Passivhaus Report produced by the All Party Policy Task force probably reported about 2 years ago and has never been responded to. Now I know some positive work on standards is being pursued but we like a strong statement of what our policy is in this area to guide officer and show we are a leader in this area.
Similarly with the use of electric vehicles we are well behind a number of other Local Authorities. We now have 3. I am told via the Examiner that we have another 17 planned. Leeds City Council has 200 electric vehicles. We need to do more.
We have been at our best as once the Leading Authority on Green policies when we have been our boldest. When we were the first Council in the country to provide householders with a universally free insulation scheme. We won the prestigious Ashden Award recognising our pioneering work in energy efficiency
When we finally decided to pursue a solar programme on Council homes ( 5 years too late in my opinion) we won the Solar installer of the year award. No we shouldn’t chase baubles for the sake of it but recognise that fortune favours the bold.
We need to ignore the naysayers, those who urge caution based on outdated or just wrong knowledge, and ignore those who will never take a risk until they have all the information they feel they need. Why should we take this approach? Because it is a climate emergency and should be treated as such. We don’t have the time to come up with perfect plans, we should be guided by what has worked well for others and take informed risks when we need to. If we heed the advice of dinosaurs we will go the way of the dinosaurs.
Action on climate change is a great opportunity for this council. New skills, activities that can bring communities together. Not simply saving carbon and energy but money as well. Let’s pass this motion and act decisively not just for Kirklees, or to do just what others have done but to provide the direction and leadership on climate action that is lacking in this country.
Support this motion
Posted by Andrew Cooper at 20:51 2 comments: