Full Council - Debate on a Shared All Party Administration - 'Winter is coming!'


Kirklees Council is facing its biggest ever challenge. Huge cuts in budgets, totalling £152million, redundancies of over a thousand already made and at least the same again to come. The governance of the Council remains with a minority administration in this instance the Labour Party.  It was against this backdrop that I proposed at the last Full Council meeting an All Party Shared Adminstration with a Cabinet composed of leading members from all political groups to work together to tackle the problems facing the Council. It is fair to say that it didn’t go down well.
If you want to watch the debate starts at 2.44.50 here

Cllr Nicola Turner, the new Lib Dem Leader’s line is that she doesn’t have to be on the Cabinet to influence the Council. This is of course true and is true of every Councillor of every Party but it is a bogus argument. The Council’s power lies in the Cabinet as that is where decisions are made.  To be part of the Cabinet gives real power and real responsibility just as the Lib Dems claim they have in Government. Maybe they are not so keen on power as they used to be.

The real vitriol came from the Conservatives. The Conservatives usually deploy Cllr Andrew Palfreeman during the budget debates to attack the Greens and they rolled him out to address our motion. He often uses humour to good effect but not on this occasion. Andrew accused me of being ‘naïve’ and claimed we had, ‘kept Labour in power’.  In reality no other group put themselves forward to run the Council following the last local elections and Andrew was conveniently forgetting that the Conservatives actually put Labour in charge of the Council in 2012 in return for a disproportionate number of Committee places. He’s also forgetting that the Greens have supported both Conservative and Lib Dem minority administrations over the past 15 years when we have felt there was a benefit to Kirklees in doing so. He referred to the ‘incompetence’ of the Labour administration which rather begged the question as to why they didn’t want to be part of the administration to deal with it if he really felt their 'imcompetence' was such a problem. He went on to say that the Greens should, ‘get to the back of the queue where they belong’ and that we needed to be ‘put in our place’. Well I guess that was exactly what I was proposing. As the smallest group on the Council we would have a proportionately smaller voice in a Cabinet formed from members of all political groups. If anything I was asking the Conservatives to actually ‘get in the queue’ and take some responsibility but alas to no avail. Cllr Palfreeman used a quote by George R R Martin the writer of Game of Thrones in his speech saying I was denying a 'hard truth' that the Greens had put Labour in power. Of course the most famous, and oft repeated quote from his book/hit TV series 'Game of Thrones' is ' Winter is coming' meaning there are hard times ahead. Hard times are coming for Kirklees and the Tories want no part in managing the depleted finances that their Government have given us.

The meeting ended in shambles. The Mayor didn’t allow me to sum up at the end of the meeting and no vote was taken on the motion which probably suited a lot of people in the room who weren’t over keen on being counted on this issue. Cock up? Conspiracy? Who can say? What the debate did manage to do was to shine a spotlight on the fact that running Kirklees Council is not a particularly attractive prospect. In hard times the sidelines is a very comfortable place for some parties to be. There are Parties who say a Green vote is a wasted vote. Voting for Parties who won’t take responsibility sounds like a wasted vote to me. 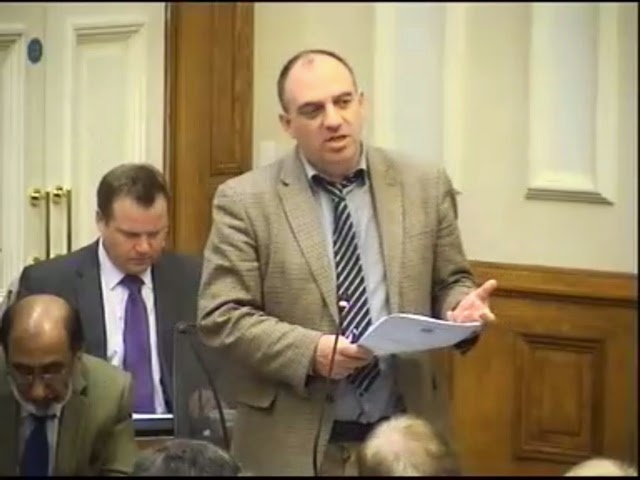 Posted by Andrew Cooper at 15:20 No comments:

Full Council - Lib Dems Tipping Point Motion – “They don’t like it up em!”

All credit to the Lib Dems. They beat us to it in proposing the Kirklees Campaign Against Climate Change inspired motion on the ‘Tipping Point’ – the point at which we go past the point of no return on Climate Change and the urgent need to act now.  I couldn’t let the moment pass without mentioning the Lib Dems actual record in Government as the Party actually in charge of the Department of Energy and Climate Change. When Chris Huhne was in the driving seat of DECC (and definitely no one else!) they declared they were going to be the ‘Greenest Government Ever’. The truth has been somewhat less than that. Massive cuts to the Energy Company Obligation Budget to placate the readers of ‘The Sun’,  severe reductions in the Feed In tariffs for solar energy, the UK heading for total failure in our obligations under the EU 2020 Renewable Energy Directive and a disgraceful role in removing binding targets at the EU level on energy efficiency and renewable energy for the 2030 targets. It would not be responsible of anyone who really knew the issues to leave the Lib Dems to ‘get the onion out’ and talk about how deeply they felt about Climate Change without comment.  So I did comment and a fair bit of personal animosity came my way thereafter.  I played the ball, the Lib Dems decided to play the man. No problem for me.

Lib Dem Cllr David Ridgeway said that all I could do was ‘snipe, mither, moan and bicker’ talk ‘tripe’  and make ‘crass comments’and claimed that I was saying that only the Green Party knew about these issues. In fact the concerns I raised were those raised by the energy efficiency and renewable energy industries. These are people who employ skilled workers across a range of technologies who are laying off staff, scaling back work and sometimes going out of business altogether.the people who often suffer are those on low incomes who don't get a new boiler or the insulation they might have expected. My comments were legitimate but a bit tough for a loyal Lib Dem to take I guess.

Some of the real venom came from Lib Dem Cllr Andrew Marchington. A bit of a shame really I used to know him in the distant past in the 80s in my old Young Liberal days. It is pretty obvious he has an issue with me in particular but then I am critical of the Party he represents. He definitely went off on one about the Greens in general and even got onto talking about the Swiss Green Party which he obviously knows more about than me.  He accused me of saying,  “The Greens are the only ones who understand it”  actually my information is based on the science and the oft expressed views of the sustainable energy industries. He even accused us of being more left wing than Labour - not a difficult task really.  He did confess to being a bit wound up during the debate. Ah well!

If you want to see it all its true horror I start speakingat 2.23.30. and the Lib Dems start losing it shortly after that. http://connect.kirklees.public-i.tv/site/player/pl_v7.php?a=152944&t=&m=flash&l=en_GB

The other thing worth noting is that the Conservatives abstained on the motion with no explanation why. This should have been acutely embarrasing to Conservative Leader Robert Light who understands  the issues and has been the Deputy Lead at the Environment Agency. I guess the climate change denying /anti wind turbine wing in his Party held sway on this one. Poor Robert!

Posted by Andrew Cooper at 19:54 No comments:

Councillors Fix Road! Can they fix it? Yes they can!

Local Green Party Councillors Derek Hardcastle and Robert Barraclough have rolled up their sleeves to fix a road in Kirkburton.

Church Green is a cul-de-sac in Kirkburton which the road surface was damaged by flooding a few years ago. Unfortunately as it is an unadopted road, serving just a few houses, Kirklees has had no responsibility to repair the road and with funding being constrained anyway it was unlikely that it would be improved in the near future.

Kirkburton Green Councillors Derek Hardcastle and Robert Barraclough secured a supply of road planings from the Council which they could use to put a new surface on the road but were told that due to funding constraints it would be down to local people to lay the road.

Councillor Derek Hardcastle said, “The planings tipped in a large pile, needed spreading over the whole road surface. We realise that residents have work commitments and could be phased by taking on a new task like putting down a road surface and wouldn’t know where to start with hiring appropriate equipment so we thought we’d have a go ourselves. We were also fortunate to be helped by two of the residents”

Councillor Robert Barraclough said “As I’ve worked in farming for over 40 years I’m used to using machinery such as mini diggers and it is a fairly straightforward job. It is not the same as an adoptable road but it will be a much better road surface than these householders have had for quite some time”

We are happy to say, thanks to all this help, the resurfacing was completed in a single day.