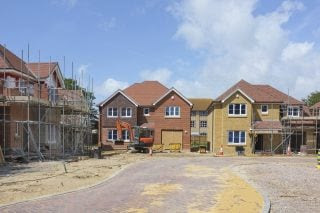 The unholy seemingly transactional relationship between the big house builders (donors) and the Conservative Party (recipient) does not serve us well in this country.

Planning laws are weakened to make it much easier for developers and therefore harder on our local environment, Building Control is not a public sector function but one developers buy in themselves. So they pay someone to tell them if they have built to a high standard. or not. We also have the issue of the 'performance gap' where the expected energy efficiency standards of new build homes rarely match what is expected under building regulations. The Grenfell Enquiry has uncovered all sorts of weaknesses in the building sector not least of which the developers responsible for poor construction simply winding themselves up leaving no one legally liable for their actions. We are not well served.

Kirklees, like all local councils, has limited powers to tackle these issues. We can ask for higher energy efficiency standards but developers have the right to challenge this request to government on financial viability grounds. However dubious and questionable their case is they are likely to come out on top.

I was pleased when I was asked by the Labour Administration to provide input into the new 'Climate Change: Guidance Note for Planning Applications (June 2021)' a document which provides local guidance to developers and also a questionnaire to complete.  One suggestion I made, which was, accepted was to put a sentence in explaining that the Kirklees Planning guidance was in accordance with the direction of travel indicated by Government,

"The UK Government has announced that it will be seeking to cut carbon emissions by 78% by 2035 so this guidance is in accordance with the direction of travel indicated at a national level".

If the Government is true to its word (yes I know!) then we should expect developers to have to achieve higher energy efficiency standards in their developments. No harm pointing this out to them.

Another proposal I made was about ensuring that if Solar PV and solar Thermal systems are installed that people could see when they are generating heat or electricity so they could make best use of the energy generated by installing,

"a visual display showing when hot water and electricity is being produced should be provided in a convenient part of the house, such as the kitchen, to encourage householders to make use of the free energy in the home when it is available."

A key part of the proposals was for all developers to be required to complete a climate change statement in the original document it asked the question,

"What measures have been/will be taken to reduce the energy demand associated with your proposed development?"

my addition were the words,

"beyond the minimum required in Building Regulations"

I could have imagined developers simply cutting and pasting from Part L of the Building Regulations as relates to energy efficiency saying,

"We have complied with Part L of the Building Regulations"

Recognition and praise are motivators, but failing that, so is shame, for taking no heed of our obligations to the environment. Here's a great parody of the Cersei's Walk of shame to illustrate the point.

Posted by Andrew Cooper at 12:47 No comments: