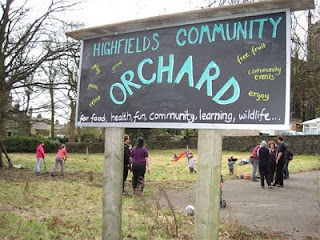 On the edge of the Newsome Ward (actually just over the edge in Greenhead Ward)is a piece of land off Wentworth Street near the centre of Huddersfield. It is a green patch of land with a small tarmac area. Ideal as a community space and as a community orchard. To try to make this a reality local people have presented a petition to the Council, spoken at Full Council meetings and asked me to negotiate with the Council on their behalf. We've all reached a brick wall. The bottom line is that the Council could make a packet by selling at as a building plot and a community orchard doesn't really cut it in the making cash for the council stakes.

What is in play here is two different approaches to value. Community value versus capital value. On the community value side all we have is bringing people together in a common project, a new low cost facility for the area, local grown healthy food in an urban environment and a valued improved green space near the centre of Huddersfield. On the capital value side they have money. Now let us not put down the value of money. After all it could be used to support community cohesion projects, local food projects, local community facilities. The irony is of course obvious. To make the irony of the situation even starker locals have decided to plant apple trees there anyway and develop the land as a community recreation and growing space at no cost to the council.

It is of course easier to take away land for building which never had a use or a purpose. Once that land has a positive community use it changes everything.

Over to you Kirklees.
Posted by Andrew Cooper at 17:39 1 comment: One of Cllr Julie Stewart-Turner's innovations in her year as Kirklees Council's first ever Green Party Mayor has been to promote local food for communities, schools and businesses. It has been a real success with the Annual Mayor Making dinner using all local produce including Yorkshire Wine this year.

One important event initiated by Julie was an event where local food producers were teemed up with local buyers to help faciliate deals that make the green principles of local production for local needs very real. This was a hugely successful event and well worth doing again.

The Awards were another element and a way of recognising acheivement of local food producers. It was a great event and pleasing to see Berry Brow Infants and Newsome High School both getting Awards. They were both in our patch and no, neither me nor Julie were Judges! But for me, and I think a lot of people, there it was great to see 'Growing Newsome' getting the recognition they deserved for all the food growing community projects by winning the Community Award. Diane Sims didn't hold back when she collected the award, with the rest of the gang, and her genuine enthusiasm and commitment to the project clearly showed why they had won.

Fortunately several people and companies won awards who were not associated with the Newsome Ward and well deserved they were too.

Will the Awards continue? I think they will and not just because Julie says so, but because the local food agenda is really going to grow and has huge potential to bring people and communities together. That is something we can't really get enough of right now.

I better plant my spuds!
Posted by Andrew Cooper at 17:18 No comments:

Sometime shortly after the dawn of time as primordial life was making its way onto the shores of the virgin Earth I suggested, and it was agreed, that the Council webcast council meetings. OK slight exaggeration but it was over a year ago. A request came from backbench councillors to move more quickly on webcasting but a meeting of Party Leaders (with one dissenter - guess who?) decided they wanted to proceed more slowly for some reasons best known to themselves.

A test of the already installed equipment has already been done and I've seen it already and everything appears to all ready to go! So what's our next move? Well on Wednesday at our next Full Council meeting we are going to have, wait for it, a test of the equipment (not live)to see how it works. By the time we finally get this going other councils will be producing live holographic projections of their meetings beamed to their expatriate residents on our colonies on Mars!
Posted by Andrew Cooper at 10:07 No comments:

The people of Huddersfield have strong views on Castle Hill and quite rightly so; it is a site of great historical significance, as well as being very much part of Huddersfield’s heritage. People who don't want a public house/hotel there have strong arguments, which I also happen to share. I do, however, accept there are also many people who would like to see a hostelry of some sort built there and have perfectly valid reasons for holding that view. The common factor though, is that people really care about Castle Hill and what happens to the site.

With this in mind I was therefore absolutely astounded by the turn of events at today’s planning meeting, when the subject of Castle Hill came up. The two Liberal Democrat Councillors from the Almondbury Ward had to leave the Planning Committee; this is even more outrageous as one of them is Chair of this Committee. They had no option but to leave because they had prejudiced their position by stating prior to the meeting, in one of their election leaflets what their views were on developing the site. They had effectively ruled themselves out of having a vote on a subject which is so vitally important to many people, because they wanted to simply and irresponsibly posture in one of their leaflets. What exactly is the point of voting for Councillors who through their own irresponsible publicity remove their own right to vote.

The Almondbury Liberal Democrats irresponsibility on this matter is truly staggering especially as they are supposed to be experienced councillors.
Posted by Andrew Cooper at 22:09 2 comments:

I join the 'Energy Generating Democracy'! 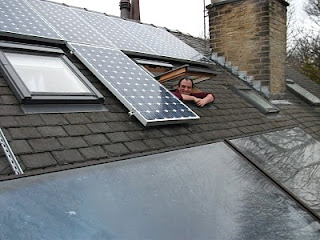 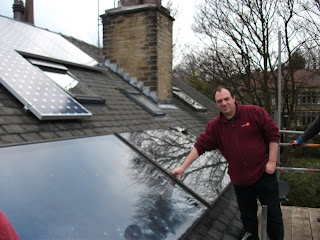 So at last our solar is installed! We have 1.3kWp of PV and a large solar thermal system feeding into a thermal store which will also be able to have heat input from a wood burning back boiler, the gas boiler and if we really need it an immersion heater. I really want to put the switch to the immersion heater in one of those glass fronted boxes saying, 'smash glass in emergency'.

In financial terms it will cost us a couple of grand with £10k of the costs covered by Kirklees Council's RE-Charge scheme and £2.5k by the now defunct Low Carbon Buildings Programme PV grant. Very roughly we will get a minimum of £400/year from the Clean Energy Cashback for 25 years another £400/year from the Renewable Heat Incentive and a minimum of £200/year fuel savings. So I estimate a very conservative financial benefit of £1000/year. I am sure George Monbiot would be foaming at the mouth if he was reading this now.

We get a couple of displays showing how much energy is being produced from each set of panels. It is quite a liberating feeling. I know one of my principal energy suppliers is 93 million miles away but I feel a much greater affinity with it than the earthbound energy companies. I guess it is because the sun never sends me any bills and 0p/kWh is by far my favorite tarrif! I do wonder if anyone has actually done any research into the psychological impact of having solar panels? It has to be positive. Being a producer of energy as well as a consumer. A feeling of control over your own energy, less dependence on big energy suppliers and the inevitable rise in fuel bills. Yup I'm feeling pretty positive.
Posted by Andrew Cooper at 16:55 No comments: 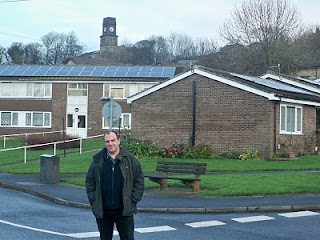 This is an uncharacteristically simplistic and wrong view of the technology from him. An average 2kWp PV system will produce around 1600 kWh of electricity per year which is around a half or a third of a households annual electricity use. In the south of England this could increase to 2000kWh/year. Hardly insignificant and not a cause for amusement.

Costs of solar panels are directly related to the current small size of the market. The aim of the feed in tariff/clean energy cashback policy is to develop a mass market for solar panels which will reduce the unit cost and therefore the cost of saving carbon. New technologies such as thin film solar PV which use a fraction the amount of silicon should also help reduce the capital cost significantly as will higher volumes.

George refers to Solar PV contributing only 0.4% to Germany’s electricity supply but this rather misses the application of the technology at the micro level. At the domestic and small scale level microgeneration technologies such as PV are not feeding into the grid but are being used within the buildings they serve and displacing the need for grid generated dirty electricity. So the impact for the householder installing may be a reduction in 30 to 50% of their electricity use. PV on this scale should be regarded as demand reduction technology as opposed to a mass generation option.

Another point he makes is that it is a technology option is only one that the rich will be able to take advantage of. However this is simply not the case. In Kirklees we now have hundreds of council tenants, many of who are pensioners on low incomes taking advantage of solar PV. Because the Clean Energy Cashback can be ‘assigned’ to the installer or social landlord who is installing the solar panels, the capital costs for installation could be met in their entirety by the revenue gained. The tenant/householder will still get the benefit of the electricity generated in their own home. With many people on low incomes being retired, or unable to work due to illness, their peak demand will more reflect the peak generation times of the solar panels during the day. So it is arguably a technology best applied to low/fixed income households. Having said that, with more affluent households working from home these days it is increasingly likely that people with solar panels will make use of the electricity generated on site rather than exporting it to the grid.

What George Monbiot completely fails to realise is the wider potential of microgeneration to change the way people regard themselves. They are no longer simply consumers of energy they can be generators and producers of their own heat and power. While that is literally ‘empowering’ it also means that householders have more of incentive to reduce their own consumption, to be more efficient in their use of energy, because now there is a ‘balance sheet’ of incoming and outgoing energy. If they are sufficiently responsible in their energy consumption they might even come out ‘in profit’ on their fuel bills. We have needed some real tangible incentives for saving energy in the home for a long time beyond the usual exhortations. Microgeneration provides that incentive.

We have the possibility of an ‘energy generating democracy’ in the UK with benefits to society and the environment inmeasurably greater than the narrow ‘property owning democracy’ that drove policy in the eighties. I find it bizarre to say this to someone with such well established green credentials but George Monbiot really should see the bigger picture here!
Posted by Andrew Cooper at 11:20 6 comments: