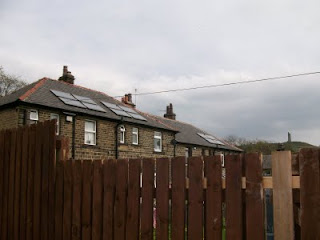 Huddersfield is a great place but I think you would be hard pressed to find anyone who would regard it as the solar energy capital of the UK. Yet it undoubtably is.

The first solar panels were for water heating and were installed in Council Housing in Kirklees on Tolson Crescent in Dalton in 1995. 8 properties were helped but in retrospect it was a poorly conceived project and I was responsible. 6 of the properties were flats with pensioners living in them with very low hot demand and as the Estate Management Officer at the time I sourced funding from Kirklees Environment Unit to get them installed. Half the Councillors in Kirklees at the time traipsed through the tenants houses feeling their sun sourced hot water. Another 7 properties were installed the following year at St John's Avenue in Newsome (pictured) as Labour's attempt to show there was no need to vote Green. As I remember I was specifically not required for the photocall on that occasion. Though I was the project manager I was also the Green Party's Campaign Organiser and that didn't endear me to the Labour administration of the time.

There followed a bit of a lull until 2000 when we established the Renewable Energy Fund and since then it has been project after project. In Newsome Ward alone we have a multitude of projects including Primrose Hill Solar village, around 120 properties with solar PV and some solar thermal, Castle Grange Residential Home with 10kWp of solar PV, the new Hillside School with a range of renewables, Croftlands with 30 or so properties with PV, Civic Centre 3 with 18kWp on the roof, Lowerhouses Junior and Infants also has a small pv system and not forgetting our solar street lights on Edale Avenue. With the RE-Charge scheme that we established for private householders taking off we have another 15 or so PV systems going in soon along with PV going in on the Edale Avenue sheltered block.

It is all exciting stuff and with the Clean Energy Cashback coming in next year we should be in for another boost. I have proposed a £5 million project to use the new feed in tariff to fund the capital outlay of purchasing and installing the photovoltaic panels. This will effectively mean we will be able to install as many solar panels on Council buildings as we like for free with no impact on the Council Tax. All we need now if for Government not too muck up the legislation and we will be fine. I also have to think of a name for the scheme. Ideas welcome.
Posted by Andrew Cooper at 07:24 No comments: 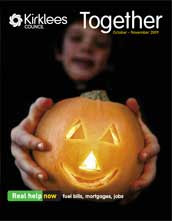 'Together' is Kirklees Council's free magazine that goes out to all households every couple of months or so. I was a bit surprised in the last one to see Cllr Mehboob Khan make reference to the support his administration have from the Green Party and the Lib Dems. I'm a wee bit more philosophical about who we cooperate with on the Council. If your starting point is that there isn't really a lot of political difference between any of the larger parties then your chief considerations are the personalities involved, whether or not you can trust them and what you can get out of them to help further the Green Party's objectives of protecting our local and global environment.

Our story of cooperating with the larger parties began with the 2000 budget in the February of that year when Labour needed 2 votes to get their budget through and we had 3 Councillors. That was the year we established the Renewable Energy Fund which since it was created has levered in millions of external funding. These were the dying days of a Labour administration that had been in a majority position for many years. Relations between the Greens and Labour were not good. It was due to the three seats we took off them that they lost their majority but the deal we secured was a good one and they were keen to demonstrate they were acting in good faith. You could be certain that their word would be kept.

Following the local elections in 2ooo we ended up with an all party administration with all groups represented and with the Green Party responsible for Housing Policy. It didn't last long with Labour and the Conservatives falling out with the Liberal Democrat leadership who they accused of taking credit for the things that went well and sharing the blame for what went wrong. They walked away and we stayed put in a Lib Dem/Green Shared Administration. Graham Simpson was our Cabinet Member for the first couple of years and he helped steer Kirklees Council into putting its housing into an Arms Length Management Company. I followed on from Graham and we managed to get some significant initiatives up and running such as free insulation for the over 60s, planning notice signs, support for vountary Christmas Bus services etc . As time went on it became more difficult working with the Lib Dems and they were obviously running out of steam and were cracking under the strain of relentless pressure from Labour and the Tories in Council meetings. We had also had enough and felt we were getting little real progress from working with them by this point and trust was breaking down. If they had survived the 2006 election we decided the price for staying in the shared Lib Dem administration would be high in terms of our policy demands and if they weren't met we would more than happily walk away.
When the Tories came to power our approach was pretty much the same as it would have been for the Lib Dems- the conditions for our support would be pretty high. We are a party of the progressive left and the idea of the Tories running the council did not really appeal to me or our party members. We ended up asking for, among other things, a £21million free insulation scheme to make the rather underpowered Lib Dem inspired Warm Zone scheme actually work. The Tories agreed ( the reasons how and why are another story) but they were as good as their word and our proposal became the properly funded Kirklees Warm Zone. Its been a combination of annoying and amusing since then to watch every Party on the council claim it was down to them. The Tories actually turned out to be not as rabid as they were in opposition and for their first couple of years did a pretty good job before they tore themselves apart trying to make the Building Schools for the future programme build a Birkenshaw High School, against evidence from officers on the educational benefits and additional costs (again another story).

So we come back to where this short tale began with a Labour administration. They were however brought in essentially because the Tories had to be removed. 'Trust' was an issue for us with Labour at the start but so far so good.

If I've learnt anything from the last ten years it is being clear about what you want from politics and make sure your proposals are significant enough to warrant you putting your support behind whichever Party is prepared to put themselves in the Kirklees Cabinet. Not knowing what you want is fatal for politicians they lose direction, focus and become vulnerable to circumstance and crisis. I've seen a Party try to run the Council with no clear programme and you start wondering why they went to all that effort of trying to get elected in the first place.
Posted by Andrew Cooper at 20:46 No comments:

Well the Council voted for our motion to end the party groups hospitality allowance. Not enthusiastically and certainly not all of them but they did. Basically the game was up and no one was going to stand up and defend it. The Conservatives bizarrely abstained on the vote without comment.

The interesting thing now is to see how its abolition will actually happen in the council budget.
Posted by Andrew Cooper at 22:34 No comments: 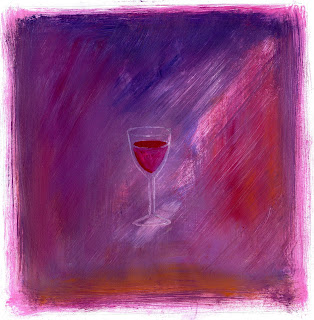 Well not really! At the next Council meeting we will be putting a motion proposing an end to the Party Groups Hospitality Allowance. It has to be a bizarre anachronism that political parties can spend up to £2000 on booze and food for Christmas Parties usually inviting key party activists.
Whenever I bring this up with other Party Leaders they mutter about 'posturing' or say it's a small amount compared wth the Councils overall budget. They miss the point and the principle. Why should political groups be able to buy booze on the Council Tax? I can't imagine many people supporting it particularly in the current political climate and a time we are supposed to be looking for efficiencies and putting services under increasing pressure.
I have proposed in every Green Party budget amendment for the last few years to abolish the Hospitality Allowance. While the Greens have managed to get millions for insulation and renewable energy we have been singularly unsuccessful with our attempts to stop the Xmas Booze Tax. Perhaps in my more charitable (and naive) moments I could say it was because this particular proposal was wrapped up in a budget amendment with lots of other proposals that it made it difficult for the other Parties to support it. So now I've made it really easy for them. At the next Full Council meeting we will have a single motion on the subject. So what will happen next Wednesday? I honestly don't know!
Posted by Andrew Cooper at 21:45 No comments: 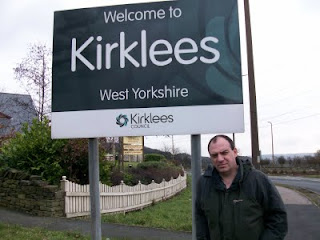 I read in today's Huddersfield Examiner how their (and Ken Davy's) campaign to get 'Welcome to Huddersfield' signs have been successful. Modesty prevents me from pointing out that it was actually me who kicked off this campaign earlier this year. Now Barry Sheerman will apparently be joining us at the official launch of the signs tomorrow. It's like the free insulation scheme all over again, everyone wants a share of the glory and why not.

The important thing of course is that we will have boundary markers which will help give the town more of a distinct identity from Kirklees (which is in Calderdale). There is a wider question of ' What is our vision for Huddersfield?'. The growing danger is that once people head over the Huddersfield border they will hit a ring road lined with supermarkets with a town full of empty shops. Then we will need another sign on New Street saying 'You are now in the 'dead centre' of Huddersfield'

The attached photo is from when I kicked off the campaign for Huddersfield signs and is my personal entry for the ' Glum Councillors' blog http://glumcouncillors.tumblr.com/