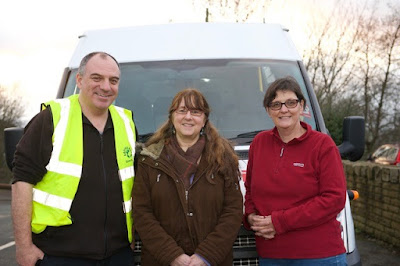 Huddersfield Greens are marking 27 years of the volunteer buses they have been running over the Christmas Holidays since 1992. Newsome Councillors Andrew Cooper, Karen Allison, Sue Lee-Richards and Sue's husband Gideon will all be volunteering on the  long running service on New Years Day

Councillor Andrew Cooper who is a volunteer driver said,

“I remember the first one we ran in 1992 which we ran as a protest against the removal of services over the holiday period. Since then some services have been resumed in some areas, including Newsome in recent years on Boxing Day”

“I really enjoy doing the bus service each year and it is now very much part of my  holiday routine. At this time of year there can be limited public transport services, trains from Berry Brow are often cancelled and taxi journeys can be expensive  so people who use the minibus we operate really do value it. We put timetables on bus stops and in local shops so people are aware of our schedule. The service is free to use but donations towards fuel costs are always welcome. Our thanks to Kirklees who provide the minibus while we provide drivers, stewards and fuel A copy of our timetable is below.”
The service provided are on New Year’s Day connects  Berry Brow, Newsome into Town and on the Huddersfield Royal Infirmary.”

Posted by Andrew Cooper at 11:14 No comments:

Posted by Andrew Cooper at 11:46 No comments:

The day before Polling Day - some thoughts with cultural references

Polling Day is tomorrow and why are we here? Essentially it was Jeremy Corbyn's decision. Without the Labour Party's support we would not be having a General Election now.

As was correctly reported Corbyn had again and again called for a General Election and had been called 'frit' and in particular 'chicken' a number of times and when, in recent months, Boris Johnson offered him one he resisted. Now anyone who has watched the 'Back to the Future' Trilogy will know that Marty McFly's achilles heel was reacting poorly when been called 'chicken'. It usually didn't end well. for Marty. Obviously Corybyn didn't watch it.  So in the run up to Corbyn's decision to back a General Election they had someone following him around in a chicken costume and constant jibing of a 'chicken' nature in Parliament. It was almost as if they wanted him to react and sadly he did. He fell into a very obvious trap

So what should you do if you are Jeremy Corbyn before you agree to a General Election?

"A clear, agreed and easy to understand position on Brexit that appeals to core supporters who were Leave voters?" - Check/Not Check?

"Contact with all other non Tory parties to agree a common strategy for the Election Campaign?" - Check/not check?

It was all pretty much  "Not check" wasn't it? So anyone with any political nous would say a big "No" to a General Election at this time. The problem was that Jezza was calling for a General Election at every opportunity over the last couple of years. Really the  only way of addressing the Brexit Conundrum was by another referendum. It was through the 'magic' of a referendun that we created the Brexit turmoil, so only using the same 'magic' could you defeat it.

Corbyn who had made his hallmark his conviction politics based on strong principles had become equivocal on Brexit. His message was far too nuanced and certainly wasn't the simple, and yes far too simplistic, "Get Brexit Done" message that the Tories have successfully pedaled for the last few weeks.

What has irritated me during this campaign is the pressure Greens have been under by Labour Party activists not to stand in marginal seats. There has been no pretence that there would be any form of reciprocation from them. Not even a token gesture of standing aside in Caroline Lucas's seat of Brighton Pavillion. Their approach has shown contempt for the Green Party, our supporters and the validity of our politics. They have also made a gross assumption that non-Tory votes are their votes and, though they don't support Proportional Representation they believe we should deny people their Green First Preference on the assumption that Labour is their Second Preference. Though I respect a lot of individual Labour members I find this hugely arrogant and indicative of a wrongful sense of entitlement that has been with Labour for a very long time. As such I did all I could not to indulge them and to get as many Green Candidates to stand as possible. Others did indulge them and they had their justifications for their actions. Justifications I do not share.

So here we are, the dawn of battle. I can't help but think of King Theoden in 'The Two Towers' before the battle of Helms Deep when he faced almost certain defeat and he is supported despite his own doubts by his devoted uncritical subjects. Corbyn and Momentum? perhaps? In the end Theoden won but that was with help of others. Elves, a wizard and the occasional dwarf. Corbyn has no others to call upon. The Green Party's role in relation to Labour would only be as unquestioning subjects with no rights or will of our own. Simply the providers of a grudging endorsement to our supporters. Ironic for Corbyn I guess as someone who is undoubtedly opposed to the monarchy to have such an approach.

The best we can hope for is a hung parliament and I hope Greens have a significant influence in that if we are lucky enough for that to occur . If not we are in for 5 years of  a Tory Government lead by someone who has, demonstrably, no respect for the truth.  As far as I'm concerned Boris may as well be a different species as I, and so many others, have so little in common with him. He has surrounded himself with people who have made a huge catalogue of contemptible utterances that I and many others abhor. In many ways they should be easy to take apart for a competent principal opposition party but sadly not this one.

If Labour do lose they will blame a lack of resources, the mainstream media etc but ultimately they need to take a long hard look in the mirror as in reality they will have no one to blame but themselves

How did it come to this?

Posted by Andrew Cooper at 18:24 No comments: