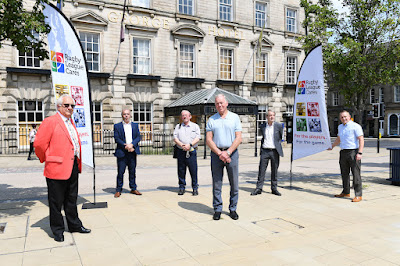 “It is so much more than a building to local people and to Rugby League fans across the world. This is where it all began for Rugby League and there is no better place to create a museum that celebrates and remembers the history of the game.”

News broke last month that Kirklees was to renege on it's promise to have the Rugby League museum in the hotel. This has provoked much anger by Rugby League fans around the world as the Council had used The George Hotel to secure the Museum and also some external funding. The Council now says that the business case just doesn't stack up and so it would be now sited in the 'Cultural Heart' of the town that is being developed as part of the Huddersfield Blueprint. At Wednesday's Council meeting, in response to a question I asked on the proposals, West Yorkshire Mayor Tracy Brabin let slip that the Council was proposing to put the Museum in what is currently the Huddersfield Library and Art Gallery on the other side of town from 'The George'. As someone who is elected to represent the ward that includes the Town Centre finding out this way, by accident was to say the least annoying.

When the Council said it was buying The George Hotel I was very supportive but at the time I asked to see what the Business Plan was going to look like and kept asking. More recently Conservative Councillors have also been asking about the Business Plans. Now we are told the numbers for including a Rugby League Museum in The George don't stack up, but still we haven't seen the papers that demonstrate this. As a local Councillor I'm just asked to trust the judgement of officers with no detail, no business case, no options to weigh up. It is all deeply disappointing and the big question is how did we end up in a position where the Council made such a firm and public commitment and a partnership with the Rugby League and then had to make such an embarrassing climbdown? As someone who is elected to represent the Council I would really like to know the answer to that question.

Posted by Andrew Cooper at 23:23 No comments: