There's no such thing as a free Mayoral Dinner

I was pleased last year when the incoming Mayor Martyn Bolt said there would  be a ticket price to be paid for the Mayoral Dinner instead of the usual freebie. Greens had always made appropriate donations at the meal to the Mayors Charity but we know that it was usually a significant proportion of the total for the evening, from our one table. Last years Mayoral Dinner, though to be paid for, was well attended and we had a good group from Kirkburton Parish Council who attended and filled a table. There was however a 'principled' boycott  by incoming Deputy Mayor Councillor Ken Smith who didn't see why Councillors should have to put their hands in their pockets and off he and some colleagues went to have a curry elsewhere. Now Ken is up for Mayor he has used his Mayors privilege and reverted to the freebie meal again. So next Wednesday, when Ken and his consort Ex Kirkburton Conservative Councillor Christine Smith, are tucking into their chicken, Green Party and Valley Independent Councillors will be at Bar Maroc (the old Long Island Bar) having San Miguel Lager and eating their delicious vegetarian pizzas, at our own cost.

Posted by Andrew Cooper at 09:41 No comments:

Posted by Andrew Cooper at 11:54 No comments:

Posted by Andrew Cooper at 21:07 No comments: 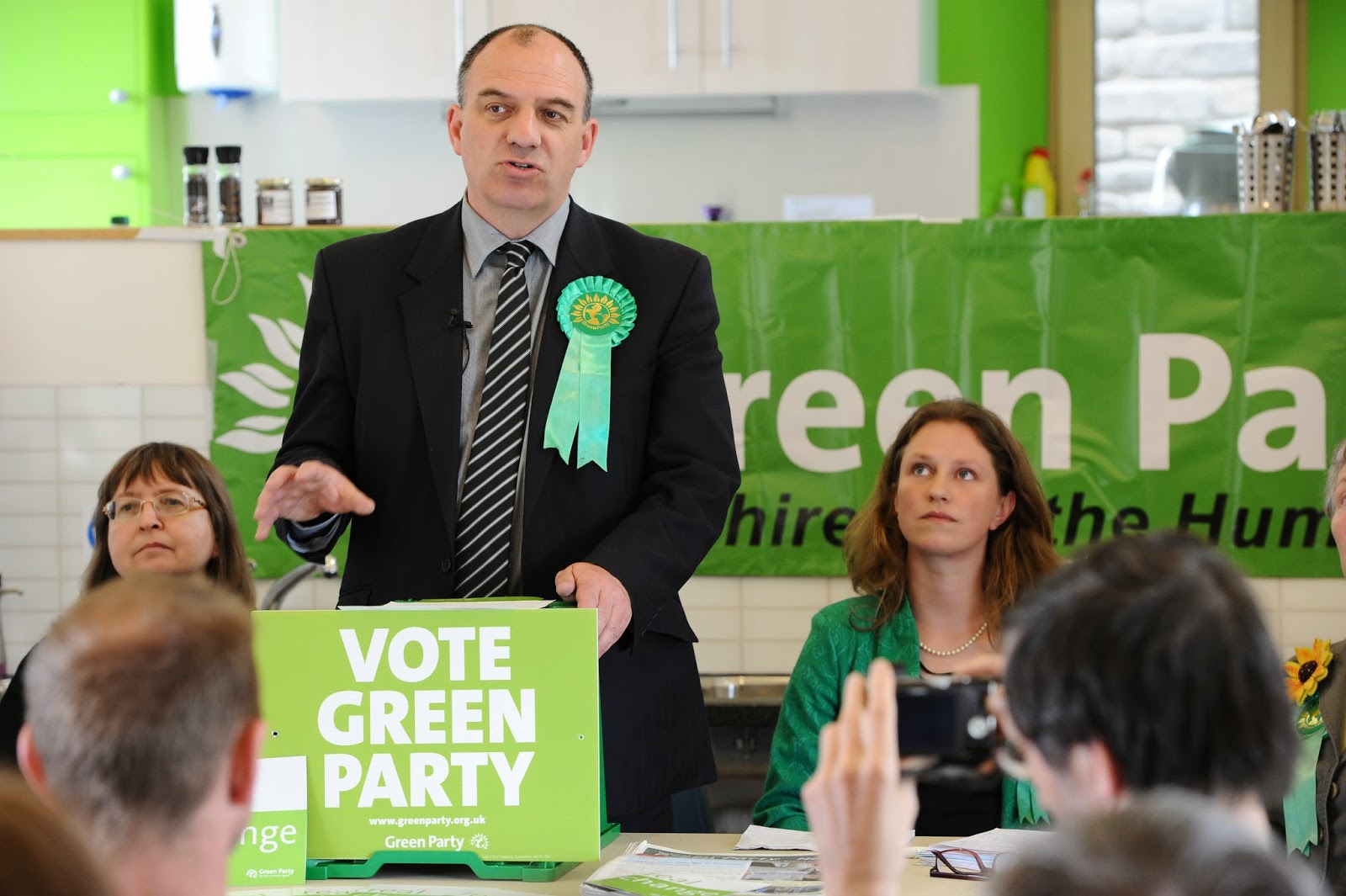 Yorkshire and Humber Green Party launched their regional European Election Campaign in Huddersfield today. Greens are in buoyant mood as a number of polls show them overtaking the Lib Dems and are now serious contenders for one of the 6 Euro MP seat in Yorkshire. The elections are conducted under proportional representation. All six Green Party candidates attended the launch at Yorkshire Wildlife Trusts Stirley Farm near Newsome. Councillor Andrew Cooper is the Green Party’s Lead Candidate and in with a good chance of becoming Yorkshire’s first Green MEP.
Andrew Cooper’s Speech to the European Election Launch
“We’ve come to launch our regional manifesto today in the Create Barn at YWT Stirley Farm because it represents an example of what we want to achieve for people and the homes they live in right the way across the Yorkshire and Humber region.
It is an old stone building that has been super insulated to a very high specification. This skilled work has been carried out by a local company employing local labour. Imagine if this sort of refurbishment was carried out to the millions of old draughty homes across the UK. Millions of people would save hundreds of pounds in energy costs that would go back into the local economy. Thousands more people would be in worthwhile employment building a future where we have warm homes that are affordable to heat. Young people would have the realistic prospect of a skilled job that they can feel proud of and build a life upon.
You would think that this was so obvious a policy that all parties would be behind it. A revolution in reducing the demand for energy in our homes, yet the Coalition government have cut funding to the Energy Company Obligation so drastically that 264,000 homes that would have been insulated, this coming year, will now not be and the Energy Companies as a result of these cuts will be £245million/year better off (Good news for their profits though!)
If elected to the European Parliament I will use the MEPs office to draw in funding and resources to improve the energy efficiency of homes in our Region and provide free clean renewable energy for hundreds of thousands of homes.
Getting Greens elected to the European Parliament can be about much more than just a one off protest. We will promote positive and practical projects that improve homes and increase skilled employment.
The polls are looking good for us. Several now have put us ahead of the Lib Dems both nationally and particularly in the North of England. Here in Yorkshire and the Humber we have already have Councillors elected in Kirklees, York, Leeds, Sheffield, Bradford and Scarborough and our local parties are fired up and fighting for every vote in this Proportional Representation Election.
Lets take the opportunity this election offers us and have a positive result on May 22nd that actually makes a real difference to peoples lives and elect our Regions first Green Party MEP.”

ENDS
Posted by Andrew Cooper at 20:09 No comments:

Posted by Andrew Cooper at 17:23 No comments: