M Card - not quite an Oyster

A couple of things recently have been driving me towards getting an M-Card for travel between Brockholes and Huddersfield. The M Card is the West Yorkshire version of London's Oyster Card and I thought it would be ideal to solve some travel problems I have.


The train journey from Brockholes to Huddersfield on our' heritage' Northern Rail trains is great but sometimes the ticket machines are either not working or the collector doesn't get round to you. This means queuing at Huddersfield station to get a ticket which sometimes takes longer than the journey itself. Then when you get the tickets they are just stupidly long and unwieldy. The ticket collectors hate them so do the passengers. Progress apparently.


So for all these reasons I thought the M Card was the solution to my problems because 'it's like a London Oyster Card' . So I've just been over to Huddersfield Bus Station to get one. The woman was very helpful and asked me if I wanted a weekly or monthly M Card. I told her I didn't travel by public transport everyday as sometimes I walk in to Huddersfield or use the car when I need it and occasionally need a ticket to be able to claim back work expenses. So the M Card unfortunately is not geared up for that like an Oyster Card is. In an average week I might use the train for two return journeys and 2 single journeys and use the car one day. If I had a weekly or monthly M Card I would end up more out of pocket than in. If I travelled by bus I would be able to one the pay as you go M Card but train travel (when it works) is cheaper and more convenient.

I'm definitely glad M Card exists and this is a real positive but I hope it can be the equivalent of the Oyster in the not too distant future.
Posted by Andrew Cooper at 21:44 No comments: 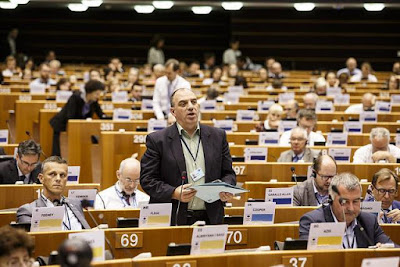 Regular readers of this blog will remember that back in December I introduced the concept of Locally Determined Contributions (and Regionally Determined Contributions) as a way of filling the emissions reduction gap that needs to be bridged if we are to achieve the targets set in Paris at COP21. These LDCs and RDCs would form the basis of targets and delivery plans for Local and Regional Governments to lead on the reduction of emissions in their own areas. The good news is that the EU Committee of the Regions voted to include the development of this proposal in the work plan they are putting to the European Commission. Hopefully the EU Commission will adopt the idea. Local, Regional and devolved governments have many opportunities to reduce emissions through transport and planning policies and even by specifying higher energy efficiency standard on buildings that they procure and land that they own. The scope for action at the local level is immense. Never have the words 'Think Global Act Local' been more relevant.

The local level in the UK was simply not involved or consulted in any way on the Nationally Determined Contributions that were presented by the UK as part of our COP21 emissions reduction figure. Anecdotally this is the case right the way across the EU and is an issue I've raised many times in Brussels in my role on the ENVE Commission of EU Committee of the Regions. I have also raised the matter directly with the EU Commissioner responsible for EU Climate Change policy Miguel Canete.

I await to see whether the EU Commission decide to adopt the development of Locally Determined Contributions in their work plan but in the meantime a number of issues are making me wonder how the concept could be adopted beyond the EU. If it is regarded as a good thing then it makes sense to empower the local level to take positive action from everywhere from Kathmandu to Kirklees. It could form the structure for a positive community based movement across the globe making tackling climate change more relevant to peoples everyday lives. Another issue that has made me want to see the idea adopted beyond Europe is of course Brexit. It would be ironic indeed if I developed an idea that was adopted by the EU and then we ended up leaving, and the policy was not adopted in the UK. The third reason is of course Trump. Among many other things he is a Climate Change Denier and policies that he may adopt in his Presidency to promote fossil fuels are a threat to us all. When Bush refused to ratify the Kyoto Treaty back in 2001 politicians at the State level defied him and took action to limit emissions at their level of Government. Locally Determined Contributions to reduce emissions below that of National Governments would give structure to that defiance and pull the USA back into action at the International level, Trump or no Trump.

I've made ICLEI the organisation also known as Local Governments for Sustainability aware of the proposal. They promote local action on climate change and other environmental initiatives. They also coordinate the Global Covenant of Mayors a network of Local Governments championing action on Climate Change. They could be the initial adopters of Locally Determined Contributions testing out the concept and developing the organisational architecture needed to deliver the cumulative emissions savings we need to achieve. The EU's key partner in promoting the Global Covenant of Mayors is the EU Committee of the Regions. Serendipitous indeed!
Posted by Andrew Cooper at 20:24 No comments: