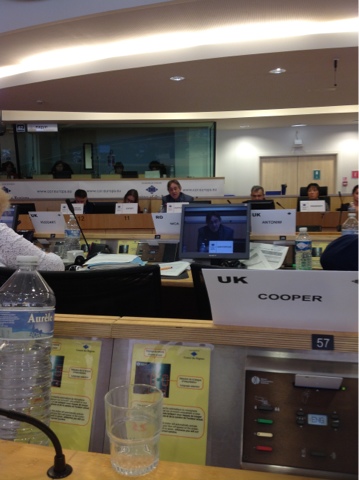 I went to my first meeting of he SEDEC Commission of the Committee of the Regions today.

What stood out for me on the agenda was the draft opinion on minimum wages across the EU. It had been raised as a issue by a Labour member and it was a fine enough paper in its own terms. One of the problems I had with the paper was that it didn't really look at low wages in the context of wider inequality and a widening gap between the rich and the poor. This is what I said,

"I am fully behind the sentiments of the draft opinion but I wonder whether the quickest way to help people on the lowest incomes is by introducing a maximum wage rather than just a minimum wage. Imagine how fast minimum wages would rise if the Chief Executive of a Company or Council could only be paid no more than 10 times the salary of the lowest paid worker. Addressing low pay is tackling one symptom of a culture based on inequality. If we are to have a holistic approach to poverty and inequality we need to address greed with as much vigour as we tackle need."
Posted by Andrew Cooper at 17:28 No comments:

Labels: EU Committee of the Regions

Kings Bridge to close for 5 weeks

During the 5 weeks that the bridge is to be closed to vehicles it will be open for pedestrian use only. The work, costing £70k will replace old gas pipes with new and is being timed for the summer holidays to minimise disruption.

Northern Gas Networks have informed Kirklees that staff will be working 7 days/week to ensure the work is completed on schedule. Diversion signage will be placed at strategic spots along the route.

Green Party Councillors Andrew Cooper & Julie Stewart –Turner met with Kirklees Highways staff and Northern Gas Networks representatives to discuss the project and to see how disruption to the closure of this busy entry point to the Town Centre can be kept to a minimum.
Posted by Andrew Cooper at 15:25 No comments:

Economic Growth was a bit of a theme for me at the latest EU Committee of the Regions (CoR) meeting. Firstly the group I am affiliated to in the CoR, the European Alliance was debating the principles that itwill be pursuing through the CoR. Throughout the draft principles document were references to Economic Growth as being always a positive thing without question. Given some of the negative aspects of Economic Growth I had asked for this to be changed to Sustainable Development and this was accepted & without much disagreement from what was reported to me. Growth came up again in the Plenary session on employment rights. Again Economic Growth was put up as a positive goal to be achieved without any question as to its negative impacts and inherent contradictions. I gave my maiden speech at CoR Plenary by qchallenging the unquestioning positive assumptions people make about economic growth. There's a great book called 'Enough is Enough' which is a great read which rightly questions whether growth is always worth it in terms of the environmental damaged and lower wages that often result. The other point is to question whether or not Economic Growth is even achievable, in the long term, as an economic aim as it is exponential in nature but consumers and resources are finite.  At the bottom of this post is an interesting film which lasts only 18 minutes but outlines the inherent contradictions of Economic Growth.

Another positive thing was I met other Greens on the CoR for the first time. At a meeting organised by be European Green Party 5 of us came together for the first time. There are about 12 Greens in the CoR but are spread across a number of groups. 18 Greens are needed across 7 countries to enable us to form our own group so we are not quite there yet and in any case perhaps our strength lies in having influence in a number of different groups.

Mr Juncker, the President of the European Commission came to talk to us about his 300+ Billion Euro Investment Plan. He outlined some details of his plan and complained about a lack of an invite to the UK Govt for a visit so I was all lined up to ask a question but he left early before I had chance to put it. So exclusively for you here is the question I would have asked.

Quantative easing is likely to be a significant part of the funding for the Juncker Plan. If this funding is simply thrown at financial institutions it will either be wasted or unfocused or both. Using that funding to support Green Bonds could ensure it is linked to achieving EU Carbon & Energy targets and linking with the energy security aims of the Energy Union. I would like Mr Junckers view of this suggestion.
I would also like to take the opportunity to invite you to the UK in the absence of an invitation from the UK Govt to look at the work of Kirklees Council is doing to address fuel poverty and reduce carbon emissions often in spite of the policies of the UK  Government rather than because of them.
So unfortunately we will never know whether Mr Juncker would have accepted my invitation to Kirklees after apparently being snubbed by the UK Govt. The question I asked is consistent with what Greens in the European Parliament have been asking for.
My next aim is to develop a proposal for a CoR opinion. I'll keep you posted.