Huddersfield rallies round to help in Calderdale Flood Crisis 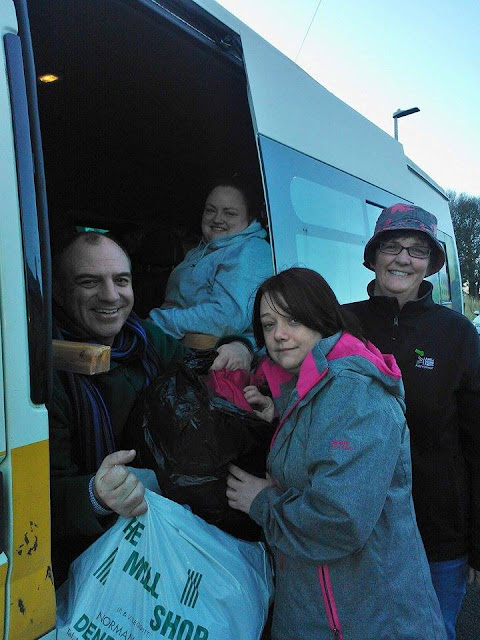 “I woke up and saw the devastation on Facebook and I was saddened by what I saw. Halifax is where I grew up. So I asked friends and family if they had any unwanted items and then went on sales sites. I contacted a few friends to help me collect things and then take them to Halifax.  We also filled 2 trollies at Asda and took them down. In the past I have been helped by others in difficult times so this was my way of giving back. Walking through Elland it broke my heart seeing familes homes destroyed and lots of belongings in gardens covered in mud and water. It was really upsetting.”

“All credit to Danni and her friends for this initiative. There is loads of goodwill out there and Huddersfield people are keen to help their neighbours in Calderdale to get back on their feet in really difficult times. It has been amazing to see so many trying to find ways to help people who have had their homes inundated by floodwater.”
Posted by Andrew Cooper at 10:45 No comments:

The Green Party will be running a free volunteer Bus Service on New Year’s Day for the 23rd consecutive year. The first service was run in the early 90s when Bus Services were drastically reduced over the festive period. This year we will be running on the route of the 319 service and timetables will be placed in local shops and on bus stops.

This follows on from the Boxing Day Bus Service Green Councillor Robert Barraclough and Derek Hardcastle ran from Flockton/Grange Moor into Huddersfield Town Centre which attracted over 50 passengers.

Newsome Green Party Councillor Andrew Cooper said,
“We are continuing to offer people a way of getting out and about without having to use a car or pay expensive taxi fares. The service not only links the communities of Newsome , Taylor Hill and Berry Brow with town but also with Huddersfield Royal Infirmary for people visiting” relatives and friends.”
The Newsome Bus Service starts at 11.00a.m and runs for 7 hours allowing people to go to Town do their shopping, visit friends and loved ones in Huddersfield Royal Infirmary or just to simply to go for a festive pint in the Town Centre.

For reference here is the timetable

Posted by Andrew Cooper at 10:05 No comments:


The developers of the Newsome Mills site have indicated that work is due to commence on converting the Mills to apartments in 2016.

Councillor Andrew Cooper has been contacting the owners of the site, Royalle Estates, at regular intervals to ask about progress

“They weren’t able to give a firm commencement date but were clear that work was to start this coming year. So it is our job as local Councillors to keep them to that. The Mills are a valued, but deteriorating listed building and the clock tower is an iconic landmark for the area. I’ll be continuing to press for progress” said Cllr Cooper

Planning permission was initially granted to Royalle Estates in 2009.  This was permission to refurbish the Mills to include 48 apartments and to build 20 houses on the land to the rear. In recent years the Council has released them from an obligation to contribute to social housing as a way of helping to reduce the developers costs and encourage them to commence work. The downturn in the housing market particularly for flats, has been blamed as one reason why Newsome Mills has not yet commenced development.

“I voted at Planning Committee to release the developers form their social housing obligation as I recognised the need to get the building developed before it deteriorated much further. Since then I and my fellow Ward Councillors have reported numerous breaches of the perimeter fence by people trying to get into the building and sometimes succeeding.” Said Cllr Cooper

“There have been some uninformed comments scrawled on the outside of the Mills blaming the Council for the deterioration of the building. If this was the case I would be the first to try to get Kirklees to act. The reality is that it is down to the developers to commence work. The bizarre element to this situation is that Kirklees are currently consulting on the possibility of development on greenfield sites In the Newsome Ward while we have brownfield sites with planning permission not being developed”

Newsome Mills is a listed building recognised by the Victorian Society.

Posted by Andrew Cooper at 14:39 No comments:

Newsome Residents and Councillors campaign to save farm fields

Newsome Residents gathered to express their opposition to Kirklees proposals, in the Draft Local Plan to allocate land for new housing on local green fields. They are backed by local Green Party Councillors.

“These fields, though owned by Kirklees,  are part of the Yorkshire Wildlife Trust’s  Stirley Community Farm Estate. Their business plan for running the Community Farm, which is highly valued by the local community, is partly based on this land. The land is also part of the green corridor of land leading up towards Castle Hill. The footpaths through the field allows people to walk up to the iconic Huddersfield high point through countryside and as such is part of the valued heritage of the whole town. ”

Other issues have been raised regarding the site and its suitability for development  including very practical issues with drainage, significant evidence of old mine workings and poor access routes to the site.
Posted by Andrew Cooper at 17:25 No comments: