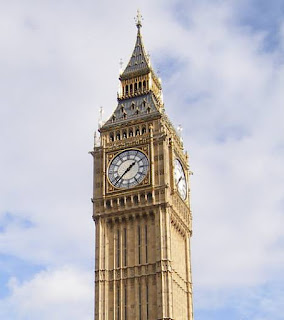 I was recently asked to write a 100 words on why I wanted the job as Huddersfield's next Member of Parliament so for your interest here it is (a bit more than a 100 words though!)

"As a Green Party Councillor in Huddersfield for the last ten years I have seen first hand the issues affecting people day to day around Huddersfield . People are trying to make ends meet financially while local services and facilities diminish and disappear around them. We need a totally different philosophy in Westminister which values and cherishes locally delivered goods and services and where care for the most vulnerable in our society is not compromised. Our values as a society have to change. We need to move away from a confused and confrontational foreign policy to one of certainty where putting our armed forces in the firing line for the most dubious of reasons simply does not occur.Sustainability is a principle that drives Greens but it is at least as relevant to the economy as it is to the environment. Just as our natural resources are been squandered so our approach to finances has been one where greed has won out over good governance.For all these reasons i decided to stand for election as Huddersfield's first Green MP to ensure these principles and ideas that are shared by millions at last get a voice in our Parliament."
Posted by Andrew Cooper at 14:27 1 comment: 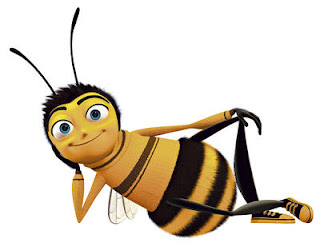 This year Newsome Green Councillors are planning to get a thousand fruit trees planted on public land in the ward. Newsome isn't a huge area but we believe we have identified enough space for the trees. The 1000 fruit tree project (I must think of a better title) has 2 aims:-

Aim 1 - To plant a 1000 fruit trees - We want to plant a mixture of fruit species giving people a range of free food in their own backyard. We are keen to involve school children in the planting to give them a sense of connection with the land around them and to give them the ability in a few years of being able to eat food from a tree they planted. I believe the benefits go beyond the food itself and it helps give people a sense of place and a better connection with the geography around them.

Aim 2 - To get the word 'Beellotments' into the Oxford English Dictionary - People are familiar with the word 'Allotments' . You get a patch of ground from the Council and grow stuff on it. Recently people have tried putting hives on allotments but the bees annoyed other allotment holders. With the thousand fruit tree scheme we have the opportunity to fence off an area of trees specifically for hives which the Council can rent out to beekeepers. The bees will emerge from their hives with trees to pollenate on their doorstep and we will be doing our bit to protect our vital bee population. Magic!
Posted by Andrew Cooper at 09:15 1 comment: 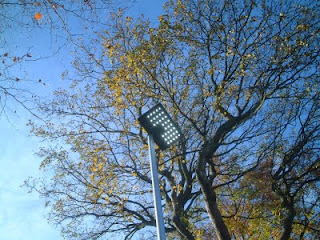 Finding ways of addressing the energy use of streetlighting has been an ongoing theme of the Kirklees Green Councillors over the last ten years. It is a huge issue and represents a significant proportion of the Councils carbon emissions. Early experiments were off grid solar streetlights on Malvern Rise, Primrose Hill. They worked, but they would never replace a standard streetlight in tems of illumination but ideal for places where an electrical connection is difficult. A hybrolight, combining wind and PV power for off grid locations is on a footpath between Close Hill Lane and Towngate is up and running and justified on the basis of the avoided costs of not connecting a long electrical connection. Our first grid connected solar streetlights were installed this year on Edale Avenue and they perform well and are comparable with a standard streetlight in terms of performance. There is an 'however' however and it is to question why have a streetlight connected to the grid which simply acts as a platform for a solar panel why not just stick a load of solar panels on top of a building instead of lots of little ones on top of individual streetlights. I guess the answer to this is to imagine them as part of a very intensively localised energy network utilising all available space to generate the maximum amount of electrical power. That is clearly not where we are at the moment but probably in my ideal scenario is where I would like us to be. Back to the 'here and now' we need to reduce the carbon emissions associated with streetlights quickly.

There is a whole agenda at the moment around dimming and turning off street lights in the early hours of the morning in isolated spots say between 2 and 6 in the morning. The other approach is to get streetlights which produce the same amount of light but use less power by utilising LED technology. We have trialled LED Streetlights with a Green Party initiative with 29 columns in the Highfields area of the ward and they are working fine (apart from the one pictured which was on during the day!).

Our next, more low tech, solution is to put stickers on lighting columns telling people who to ring if the light is on during the day (dayburner) or isn't working at all. I have reported stacks of dayburners over the years to Kirklees Highways but the quicker they are noticed and reported the better and these stickers will help.

One last thought. Each year we go through a portion of space littered with dust particles sometimes resulting in spectacular meteor showers. Why not turn off streetlights for a few hours in the late evening/ early hours of the morning on that day, so we can have a free meteor show for the area without the distractions of light pollution.

Posted by Andrew Cooper at 23:03 No comments:

... and solar energy in Sheffield 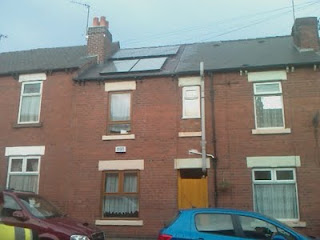 As a bit of a footnote to my last postI went to a showcase event in Sheffield on refurbishment of housing last week and they had a demonstration 'eco' refurbishment that the Council had conducted on a property in the Page Hill area. It had solar thermal and solar pv panels and was very much a 'one off'. It shows how far Kirklees has come that we can give tours of whole estates using solar energy and Sheffield has just one. They made the same error I made in my first solar project of putting a solar thermal panel on a small property with very limited hot water demands. I'm not having too much of a go at Sheffield though. They are the second Council in the country to introduce a free insulation scheme for all their residents but over a 6 year timescale not a 3 year timescale like the Kirklees scheme.
Posted by Andrew Cooper at 10:07 No comments: