The signs are good! (now) 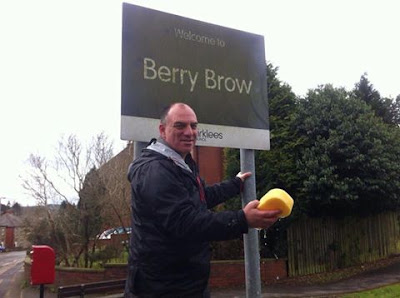 Green Councillor Andrew Cooper has done a 'spring clean' of the 'Welcome' signs in 2 parts of the Newsome Ward.

"The Welcome signs to Newsome and Berry Brow weren't particularly welcoming and covered with muck and green sap from nearby trees." said Councillor Cooper. "One approach would have been to ring Kirklees with a low priority request which may have got done a few weeks down the line with possibly a few reminder phone calls. It was much easier to get a bucket of warm soapy water and a step ladder and just do it. We've done this before with other signs around the area but these 2 had got really dirty. I'd encourage anyone who sees simple things in their area that will just take a few minutes to sort out to have a go. A lot of people do already and I often speak to people who pick up litter on their bit of street who make a tangible difference to their local community." 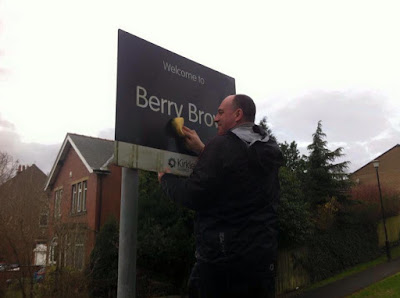 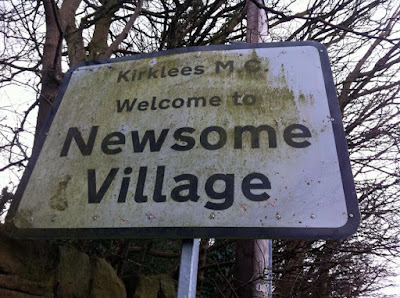 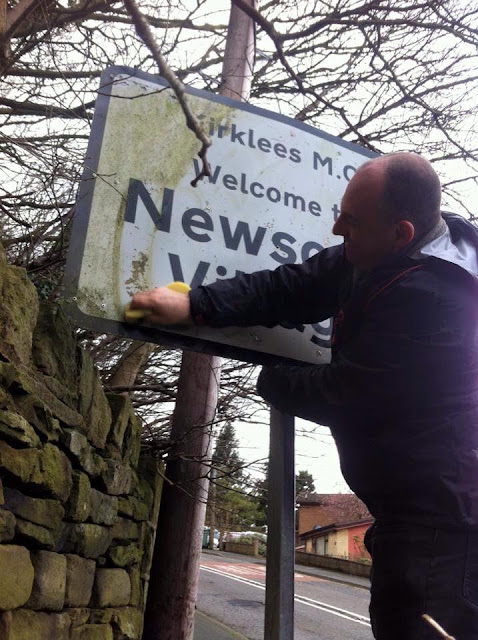 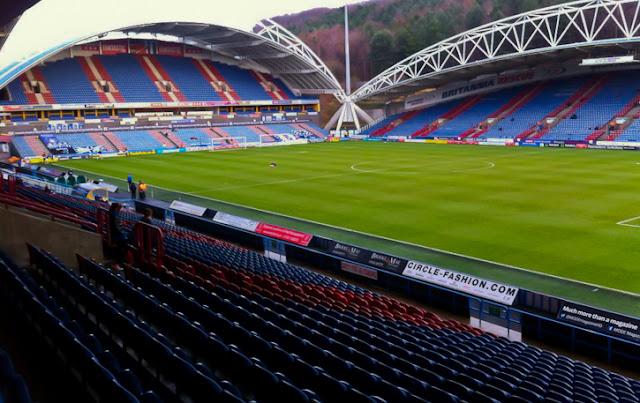 Green Party Councillor Andrew Cooper has called for the John Smith Stadium stands to be made available for the HRI Public  on Monday 18th April.

“The Calderdale and Huddersfield CCGs have completely misjudged the concerns of local people so far. At the Pre Consultation Event at Briar Court Hotel the hall could have been filled twice over. That should not happen again. There is a lot of interest in the Public Meeting at the John Smiths Stadium on Monday 18th April and they should be planning for a big crowd. I don’t believe we are just talking about a few hundred people attending. I think we are most likely talking thousands. If they hold another event where people are left outside an unable to participate it is further evidence that they are out of touch with public opinion. There should at the very least be a contingency plan to make the stadium stands available for the event. This holds 24’500 people and should be adequate.”
Posted by Andrew Cooper at 09:12 No comments: 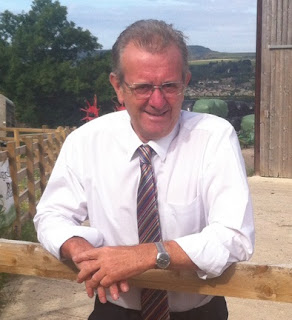 Tell us a bit about yourself?
I’m a retired dairy farmer, and have been married to Maureen for 42 years. We have two grown up children and one new grandson. I have been Chairman of the local NFU Branch and served on the NFU County Executive including through the Foot and Mouth crisis. I am passionate about promoting locally produced food and have managed projects to promote it across the region. I have served on Kirkburton Parish Council for Farnley Tyas, Thurstonland and Stocksmoor Ward since 2007, have been re-elected twice. I was elected as Parish Chairman for the 2010/11 Municipal year.

How long have you lived in the area?

I have lived and worked in Farnley Tyas all my life, and was, until my retirement from farming, a third generation farmer in the village. My grandfather first moved into the village to become landlord of the “Golden Cock” public house, moving away, to return in the 1930’s to take on Beech Farm. My father succeeded him and took on the tenancy until his death in 1981. I then took on the farm at 32 years of age and ran a successful dairy and mixed farm until 2003.

Why the Green Party?
I’ve always worked close to nature being a farmer and I have watched the seasons and weather patterns change. I feel that the Green Party starts from a different place and isn’t left, right or even centre. There are people who wrongly see the Green Party as ‘sandal wearers’ or politicians who would take us to living back in caves. I certainly don’t fit that stereotype! I’ve seen that Greens can work successfully alongside business and innovators on practical and worthwhile ventures that make the world a better place.

How did you feel when you were first elected as a Councillor in 2011?

Bemused! I’d worked alongside local Councils and been a Parish Cllr for 5 years but it was a big step up and a steep learning curve at first on Kirklees. However I quickly got up to speed with how you make things work on Kirklees and what is and what is not possible. I’m not afraid of hard work and I enjoy a challenge so it has been and continues to be, a rewarding and enjoyable journey.

What is your proudest acheivement in your time as a Kirklees Councillor?


Getting the trust of local residents across a wide range of political persuasions and widely differing backgrounds. I know a lot of my personal support doesn’t come from people who traditionally vote Green but people who know I will try my best and give a straight answer to a straight question.

Kirklees , like many Councils, is in a difficult financial position what can you do to help?

Having been self-employed for almost all my working life I know the value of a Pound and I am acutely aware of the need to get best value whilst protecting essential services. I can work constructively with Councillors from all political parties and council officers to try and limit the damage resulting from cuts and communicate these changes to residents in a politically unbiased way.

What do you think people want from the person they elect as their local Councillor?

First and foremost people want their local Councillor to be honest and approachable. They want someone who has an ability to get things done but to be realistic about what can be achieved. People don’t want politicians to make false promises and not to play party political games that insult peoples intelligence.

What difference does a Green Party Councillor make?

I don’t feel I am constrained by a national political agenda, nor am I asked to tow the party line. We have a small, but influential, group of Councillors who are committed to working locally to protect local services in a time of government cuts. We try to think ‘outside the box’ and to innovatively solve problems. The easy thing to do is just to oppose all cuts and not offer any real solutions but Greens are prepared to work across all political groups and engage with whoever is running the Council at the time. If you don’t take this approach you can find yourself in a powerless position and just shouting from the sidelines. 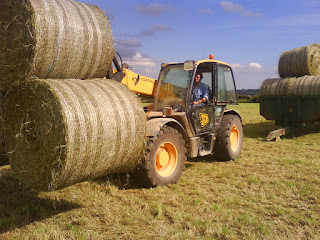 When you aren’t working in the community or attending Council meetings how do you relax.

I’ve still got my tractors and some equipment and it’s a real pleasure to get out ploughing and driving for one of my fellow farmers during the Summer months. I’ve always read a lot and in any spare time and lately taken to political autobiographies of ‘all political flavours’. I walk for exercise and Maureen and I have a list of local Ward walks so we regularly walk the villages in the Ward

Posted by Andrew Cooper at 15:32 No comments: