A Social Energy Target for the European Union

One of the features of the European Union are the Targets and Directives that are produced for the member states to sign up to, to abide by and to seek to achieve.

The 2020 targets seek to improve energy efficiency by 20%, achieve 20% renewable energy as a percentage of total energy and reduce carbon emissions by 20%. Across the member states different policies have been established to achieve these  targets. In the UK much of the funding to help us reach our share of the target comes from energy companies so we all effectively pay for it through our fuel bills. Policies in the UK such as the Energy Company Obligation and the Feed In Tariff are paid for through a levy on our fuel bills. though the vast majority of rises in energy bills are nothing to do with 'green taxes'. This still doesn't stop climate change deniers and the Daily Mail (as if they were different in some way!) attributing energy bill price hikes seemingly exclusively as a result of 'green taxes'. Nethertheless it is important to ensure those on the lowest incomes are the ones who benefit most from environmental taxes to ensure fairness is a fundamental consideration when seeking to address environmental concerns. This is where the concept of a Social Energy Target came from.

So what is an EU Social Energy Target? The EU is currently considering the 2030 successors to the 2020 renewables, carbon and energy efficiency targets. There is now an opportunity to develop a complementary target which not only seeks to reduce fuel poverty but also encourages this aim to work in harmony with environmental targets. If this can be achieved the assertion that environmental and social targets are incompatible can be not only challenged but also demonstrably disproved.

What might a target look like and how might it operate? The UK did have a target of eradicating fuel poverty completely by 2016. With rises in fuel prices, cuts in income and frankly utterly inadequate policies to address the energy efficiency of homes this is simply not going to be achieved. There is a clear need to develop a  realisable plan to ensure affordable warmth and an end to fuel poverty. This may result in policies that encourage the installation of solar panels, such as the feed in tariff being directed to those on lower incomes OR incentivise government to direct more of the £1.3 billion/year Energy Company Obligation funding to be directed to people in fuel poverty.

The other benefits of the  Social Energy Target could be less cold related illnesses, more jobs in the energy efficiency sector. This has got to be worth pursuing and progressing. I'll keep you posted!

Posted by Andrew Cooper at 17:06 No comments:

Letter to Yorkshire and the Humber MEPs regarding Fracking 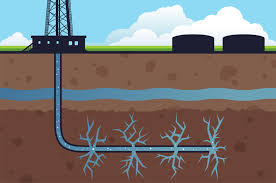 RE: September 11 – Plenary vote on the Environmental Impact Assessment (EIA) Directive – amendments on shale gas and other unconventional hydrocarbons

On July 11, the Parliament’s Environment, Public Health and Food Safety Committee voted overwhelmingly (49-13) in favour of a report by MEP Zanoni on the European Commission’s proposals for a review of the Environmental Impact Assessment (EIA) Directive.

The Committee notably adopted proposals to adapt the EIA Directive to the arrival of a new type of industrial-size activities in Europe, namely the plans to explore and extract unconventional hydrocarbon such as shale gas in Europe. The negative environmental, health and climate impacts associated with hydraulic fracturing or fracking - the technique used to explore and extract such unconventional hydrocarbons – have been well documented since the shale gas drilling boom started a decade ago in the United States. The proposals in the Zanoni report allow us to take the necessary measures in order not to repeat the same mistakes observed in the US.

I respectfully ask you to offer your support to the current version of the Zanoni report and to the unchanged provisions on shale gas and other unconventional fossil fuels in particular amendments 31 and 79 point (e). The EIA, Annex I, Article 14 shall be amended as follows:

14a. Exploration, evaluation and extraction of crude oil and/or natural gas trapped in gas-bearing strata of shale or in other sedimentary rock formations of equal or lesser permeability and porosity, regardless of the amount extracted.

14b. Exploration and extraction of natural gas from coal beds, regardless of the amount extracted.”

This is necessary to provide a legal clarification. According to the European commission, unconventional hydrocarbon projects are now already subject to an EIA because it cannot be excluded, on the basis of objective information, that the project will have significant environmental effects. But since not every member state or administration / public authority is willing to take this into account, an EU-wide mandatory EIA for unconventional fossil fuel activities is vital.

These amendments follow strong and clear recommendations, which received broad political support in the vote on last year’s European Parliament resolutions on shale gas. In the own-initiative report on the “Environmental impacts of shale gas and shale gas oil extraction activities”, authored by MEP Boguslaw Sonik, the European Parliament called “for the inclusion of projects including hydraulic fracturing in Annex I of the Environmental Impact Assessment Directive” (§24).

These amendments are crucial, because the current version of the legislation fails to guarantee a systematic and mandatory EIA before new unconventional hydrocarbon projects start up:

• Because they have a maximum daily production rate of between 115,000 and 250,000 m3, they will never meet the 500,000m3/day threshold mentioned in the existing legislation. As a consequence, no mandatory and systematic EIA for UFF projects can currently be guaranteed.

• It is essential to engage in a systematic gathering of baseline data – with samples of air, water and soil quality – in order to prove the causal link between UFF operations and air and/or water contamination around drilling sites.

If large-scale UFF operations are allowed to go ahead in an unregulated way, this industry will repeat the same mistakes as in the United States, with the same dramatic impacts for the climate, environment and public health. I believe it is absolutely vital that this recommendation receives strong support, and I look to you to represent my views in this matter for the good of our constituency and for the rest of Europe. 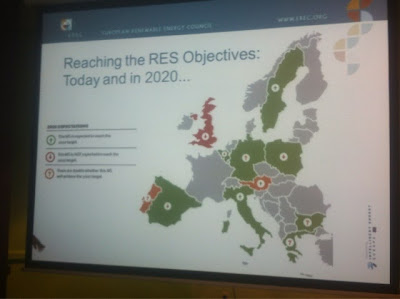 At the Green European Foundation Seminar in Brussels this weekend I had a detailed look at how European energy policy was developing and a 'heads up' some of the issues that will be facing the European Parliament over the next couple of years.

One speaker had a slide that caught my attention. It showed a map of Europe indicating progress towards the EU 2020 Renewable Energy Target and the UK standing out as one country that was looking unlikely to achieve due to slow progress.  The target is legally binding for each member state so each can play their part in achieving an overall 20% of total energy to be derived from renewable sources by 2020. This target does not just cover electricity but also embraces heat energy and transport fuels and the UK proportion of the 2020 renewables target is 15%. This lower than 20% target reflected the UK's poor starting point when the directive was signed. At the time only Malta and Luxembourg had a lower proportion of their energy coming from renewables. Other countries which had made more progress had higher targets such as Sweden and Germany to help make up for those countries that had been historically backwards in promoting wind, wave and solar technologies like the UK. It was a bit humiliating, I felt, that we had such a low target but even this was regarded by many in the last Labour Government as a tall order. The story goes, apocryphal or not, that we thought we were signing a Renewable Electricity only target and didn't realise that we would also have to make significant progress on renewable heat and transport fuels. True or not, it has all the characteristics of the sort of cock up we might expect from a Blair Government which never really grasped or understood the potential of the renewables sector.

So what of the 'greenest government ever' and their action towards achieving the target? A couple of years ago as the cuts to the feed in tariff for solar was being introduced I shared a platform at an event in Westminster with Climate Change Minister Greg Barker MP and I made the point that the drastic cut in the level of feed in tariff would massively slow down the deployment of solar photovoltaic panels and put at risk the likelyhood of us hitting our EU target. Minister and officials insisted I was wrong and they were confident that the target would be achieved. I left suitably chastened. Well maybe not!

So why are we where we are? Why are we behind the curve compared with other countries on renewables? Onshore wind has been slow to deploy due to many applications being held up in the planning process. Offshore wind has made significant progress, is less controversial for some (not Donald Trump) but is expensive to install with long lead in times. Solar is quick to deploy but the FIT cuts massively slowed down this mass market and popular technology. Co firing of coal fired power stations with wood, with its dubious environmental credentials, also hilt the buffers with Drax shelving plans to go 100% biomass. A lack off assurances from Government on funding made them drop this one. Renewable Heat has been slow to get off the ground. The last Labour Government first consulted on a Renewable Heat Incentive RHI (a sort of feed in tariff for heat) in 2009 and now the domestic element of this will be introduced next year, nearly 5 years after I installed my panels on the back of the announcement. To be fair though the RHI  looks like a good scheme and will be popular with those industries that install solar thermal, heat pumps and biomass boilers. The transport element of the target is dictated by the biofuel content of petrol and diesel. This has been an area of conflict between the renewable energy sector and environmental NGOs both of who often seem to take absolutist positions on what has unhelpfully being characterised simplistically as a 'food v fuel' issue. So the pressure to achieve the target has been heaped onto the electricity element of the target and wind in particular.

Of course there is another approach to this whole issue. Rather than simply seeking to accommodate demand we should be seeking to reduce energy demand through energy conservation measures but we lack effective, fit for purpose policies and mechanisms to deliver energy efficiency measures at the level we would need to make a difference. Reducing the total amount of energy we use would make a percentage target easier and cheaper to achieve. Predictably The Green Deal is not turning out to be as popular as the Coalition hoped and the Minister has talked of a long term 20 year timeframe for it to come up to speed. 'Green Deal' is now being reframed to refer to action taken as a result of Green Deal assessments and installations under the Energy Company Obligation. We have now entered the 'throwing money at it' phase with an initial £20million being offered by Government to Councils who can come up with plans to promote Green Deal finance in their areas. When that fails , as it inevitably will, we will then enter the 'who's to blame' cycle and hopefully the development of an energy efficiency mechanism that will actually work.

Here ends my first Blogpost typed while travelling on the Eurostar hopefully more to come over the next few years should all go well next May.
Posted by Andrew Cooper at 09:51 No comments: