The heat is on - Climate Change kills. 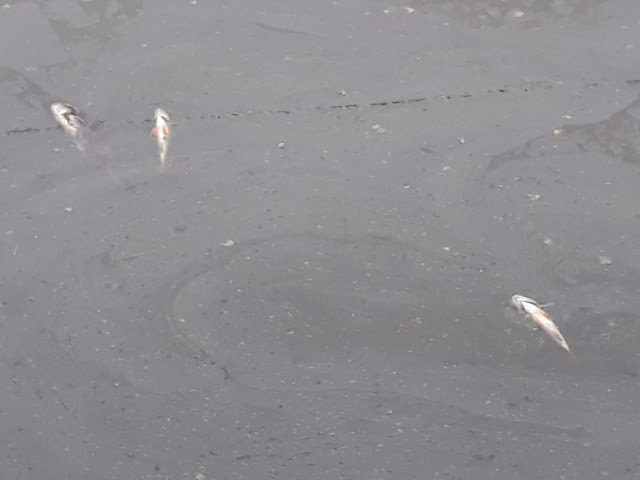 In my role as a local Councillor I got a call the other week from a local resident who said they had seen hundreds of dead fish in Newsome Mill Ponds in Huddersfield. I went out to investigate and there they were lying on the surface being watched over by a heron who looked like he had already had his fill of this unexpected bounty. The theories from local people came thick and fast. Poisoning and pollution were what people initially thought but following investigations it turned out it was none of these. The long hot dry spell had de-oxygenated the water and the fish had simply suffocated. The had been killed by the weather.

In the past, as a Green, who wants to be taken seriously on climate change I've been reticent to link single weather events to climate change, but this is different. The phenomenon we are experiencing is a global one. We have had huge moorland fires on Saddleworth Moor, wildfires in Greece that have killed many, even wild fires within the Arctic Circle due to the heat and record temperatures in Japan. Comparisons with the summer of 76 are not really valid as that was very much a UK experience. This is global one and we know that extreme events such as these are going to become more common as climate change begins to have a greater impact.

Two events happened today of note. One was a new report titled 'Planning for Climate Change - a guide for Local Authorities' by the independent Local Government Information Unit. It referenced a report by the Royal Town Planning Institute from last year stating,

"that a lack of integration of climate change into local plans was partly a result of a skills shortage related to budget cuts, and partly due to changes in national government policy that appear to de-prioritise climate change action."

Sadly this comes as no surprise. The actions of our Government appear to be those of Climate Change deniers not that of an enthusiastic signatory to the Paris Climate Agreement. The evidence is there for all to see not least of which being a huge drop in renewable energy and energy efficiency installations.

The other event today was the Government decision to allow Fracking at Preston New Road in Lancashire against the wishes of the Lancashire County Council. Nationally the Government is pushing through permitted development rights for fracking exploration drilling overriding any local democratic objections. There is a sad lack of politicians in Westminster who 'get it' who understand that promoting these policies threatens us all.

Promoting action on climate change is so positive in terms of skilled jobs, putting money back into local economies, increasing energy security not to mention actually ensuring our survival and that of many other species that it beggars belief that any Government can turn its back on it. The disconnect between the impact of climate change on our weather and the decisions Governments and some opposition MPs make is truly worrying. These MPs must be made accountable and challenged for the stances they take. It has to be us and it has to be now. It is that urgent.
Posted by Andrew Cooper at 20:33 1 comment:

So here it is and thanks to Susan Jones for putting it together. It was a lovely sunny day  in the Lickley Hills looking over Birmingham. Filming had its challenges. Drones buzzing and hovering nearby, a dog owner shouting for his mutt.Yours truly may have had one or two takes and the outtakes would probably be quite amusing if they ever see the light of day.

Feedback so far has been great so a good start. A few weeks to go now in the campaigning period and like in our Local |Elections it is a case of keeping your cool, focusing on your own messages and not get distracted by things that niggle or annoy you.
Posted by Andrew Cooper at 22:32 No comments: