Its mission is to achieve the following,

By 2020 Kirklees is an informed citizen-led democracy with accountable elected representatives who enable communities to influence and affect decisions governing their lives.

It is going to do this by looking at the role of Councillors, how we run our elections and seeking to improve how we go about our decision making to enable people to feel they have more of a stake and influence over how our decisions are made.

Kirklees is not a loved institution. It is an artificial construct cobbled together after Local Government reorganisation in 1974 and named after a place in neighbouring Calderdale rather than anywhere in the actual district. As such the name pleased no one rather than alienating any particular town by naming it after another. There are regular calls to split the Council by the Public and politicians seeking to garner a few populist votes but both Labour and Tory Governments have dodged this over the years.

A lot of time and effort has gone into preparing and running Commission events and sourcing witnesses by Kirklees officers. My own view is that we have the opportunity to come up with some radical and far reaching proposals for the Council to implement and where necessary to seek Government approval. we cannot go through this whole exercise and only propose piecemeal changes. We also need to regard what we are doing as a possible template for other cOuncils We need to be bold, forward thinking and consider doing things that have never been tried before. I will be blogging about the work of the Commission throughout. Lets see where the journey takes us

Posted by Andrew Cooper at 19:46 No comments:

Beauty like so many things is subjective, to a point.

If I was asked for a view on whether Cross Church Street in Huddersfield was one of the most beautiful streets in the Town Centre  I'd be hard pushed to agree to that one! It has some high points. I quite like the shop frontage for the hardware store, some of the pubs have made an effort to have attractive signage and quality fronts but then there are the dubious looking takeaways and other shops with tired old plastic signs.

The Ugarit Restaurant has recently opened on the street  offering Syrian and Lebanese dishes and it looks like they have made a real effort to improve the appearance of the building both on the interior and exterior. I was surprised to discover that the Council's Conservation Team in the Planning Service deemed the signage outside Ugarit to be a detriment to a listed building and ordered changes to be made. The Restaurant was formerly an Estate Agent with a plastic sign outside. No damage has been caused to any of the buildings features as a result of the restaurant sign going up. A short wander down Cross Church Street and the vast majority of people I believe would regard the Ugarit shopfront as a positive thing compared with some of the garish signs on display. I have used my right as a Ward Councillor to refer this matter to the Planning Committee to see whether other Councillors see this issue as I do. There are a number of times I've seen matters differently to the Conservation Team in the Council. I really don't regard myself as some sort of Philistine who doesn't appreciate the need to preserve important architecture but I do find it difficult on a number of occasions to appreciate their viewpoint like this one on changes to New North Road Baptist Church from a few years ago.

Ugarit is a business which will hopefully be part of an improvement to the Town Centre and I hope the Council will be seeking to help businesses like this get established and not be regarded as an obstacle.
Posted by Andrew Cooper at 20:05 2 comments: 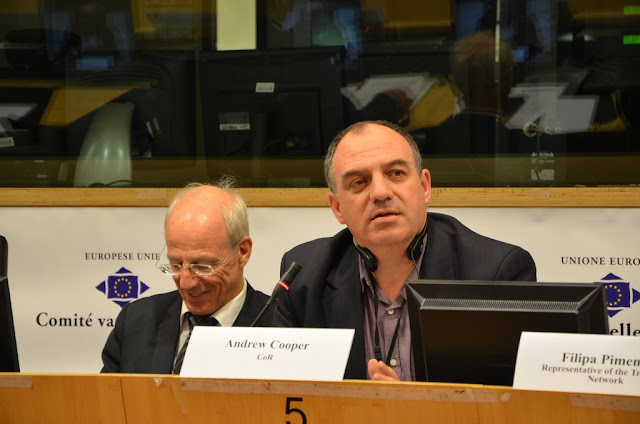 Kirklees Councillor Andrew Cooper is to attend an International Summit on Climate Change in Morocco in November. Andrew is the Green Party's Energy Spokesperson.

COP22 (Conference of the Parties) includes representatives from most Countries in the world working together to develop policies and programmes to address climate change. Councillor Cooper will be attending as a member of the European Union's Committee of the Regions where he is a leading member of the the ENVE Commission, that leads on Climate Change and Energy policies.The EU Committee of the Regions is the body that leads on the role of local and regional authorities and their role in delivering policies agreed at a European level.

" The negotiations in Paris last year established the targets for reducing greenhouse gases. The talks in Morocco are all about the practical steps we will need to take to make those targets a reality" Councillor Cooper said

" The UK signed up to the EU target in the Paris agreement and we will have to play our role in acheiving that target whether in or out of the EU. The UK may have voted for Brexit but we can't opt out of the world and the consequences of an ever warming planet."


" Each country that signed the Paris Agreement agreed their own Intended Nationally Determined Contributions to acheiving that target. Government's may decide targets but it is at the local and regional level where planning policies, energy efficiency programmes and renewable energy projects can play a big role in making those targets a reality. Our practical experience at the community level is vital. We have to think global but we have to act at the local level".
Posted by Andrew Cooper at 14:39 1 comment:

Posted by Andrew Cooper at 14:36 No comments: