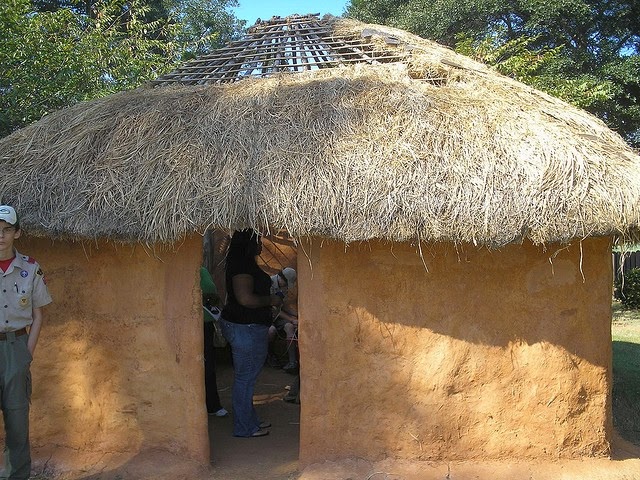 My last post regarding our successful Green Party Amendment to Kirklees Councils Budget dealt with Tory Cllr Donald Firth's description of the Passivhaus Developments we proposed to support as "mud huts". As if by design,  this week a private householder in Netherton submitted a Planning Application to build a 'Passivhaus' dwelling. The Planning Committee on Thursday deciding on the application included both myself and Councillor D Firth. Planning Officers presented the application and the Chair then asked if there were any questions from Councillors. My question was "Is it made of mud?" The officer looked confused and said "No" I then expressed my own confusion as Cllr Firth had carried out "research" saying they were made of mud. I heard Cllr Firth shout something or other and the meeting carried on. You have to get your entertainment where you can these days. The application was passed. Even Cllr Firth voted for it despite it being a "mud hut"!
Posted by Andrew Cooper at 21:40 1 comment:

Passivhaus a mud hut according to the Conservatives

One particular treat from last Wednesday's Kirklees Budget meeting was Conservative Councillor Donald Firth's speech against the Green Party amendment. He declared that he had done some research into 'Passivhaus' design that we had proposed for around 50 homes in Kirklees. His 'research' revealed that we were asking people to live in mud huts. I don't know where he did his 'research' but it is probably the same place where he comes up with his bogus reasons to oppose every wind turbine that comes to Planning Committee. The last one that came up was probably the smallest wind turbine in the world. The fact that I supported the application in the ward he represents lead to a tirade of abuse from him and his fellow Tory Councillor Ken Sims after the meeting. Telling me to "keep my nose out of the Holme Valley". Their anti Green views are so venomous and obviously nonsense that its almost funny listening to them. It's like they've been preprogrammed by the Daily Mail. What is bizarre is that hey were opposing housing which will have  energy bills that are less than a £100/year meaning more money in the local economy, less fuel poverty and also less greenhouse gases. Still that's logic and that's a foreign land to Cllr Donald Firth.

Posted by Andrew Cooper at 15:14 No comments: 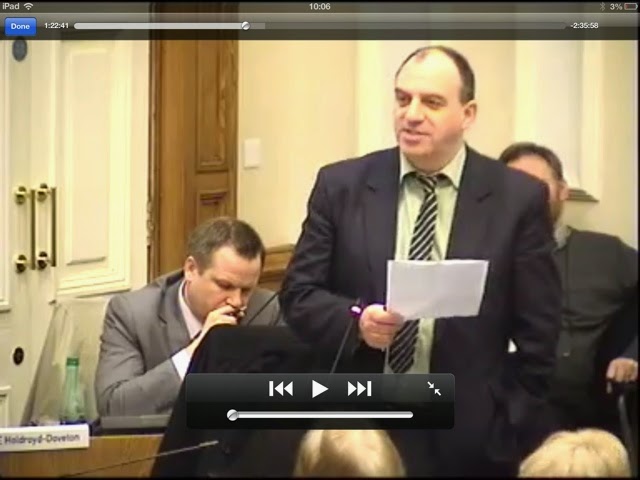 This is not a fantasy amendment. There are no bridges striding majestically across the Colne Valley as in the Lib Dem Amendment. There is no ‘make believe’ building where Huddersfield Library will move into as in the Conservative Amendment.

What all the amendments cannot do is fix the impact that Government cuts will have on Adult Social care. We can seek to limit the impact of cuts. What we need from Central Government is funding for free adult social care as a right in the UK. It should be a human right and the mark of a civilized society in the 5th or 6th richest country in the world.

What our amendment does is recognise the cards we have been dealt with by the Lib Dem/ Conservative Coalition Government and seeks to find to find positive actions that we can take using the power we have.

We have spoken to the Administration about our proposals because if we didn’t then these amendments that we have submitted would be nothing more than posturing. Posturing amendments put forward with no expectation of implementation. The Lib Dem and Conservative Amendments are put forward by parties that cower away from responsibility. These are Parties that, I guess want votes but don’t want to do anything with power if they are given it.

Greens and Valley Independents have already put real time and effort into protecting our Libraries. Not though a fantasy fix. Not an  attempt to hoodwink voters like the Tories with a non-existent magic bullet but concrete proposals built on time and effort and I have tremendous respect for my colleagues who have worked so hard and with real commitment working towards a more secure future for our local libraries.

We are proposing a workable alternative to food banks. So food banks will be there for immediate and emergency cases but for ongoing support low income householders will be able to get food at a third the retail price for a 6 month period to help them get back on their feet. Not only that but they will receive a package of advice and support to help them improve their lives. This is not fantasy. This is reality. Myself and Councillor Julie Stewart-Turner went with Cabinet Members to ‘Community Shop’ in Goldthorpe near Barnsley. They take surplus food that would otherwise go to landfill and use it to help feed households who have some very difficult choices to make on a limited budget. The fact that they will be paying for it even at a discounted rate gives people back their dignity. It is not charity. To the Council this is a one off cost not an ongoing one but the benefits are numerous.

Building Services provide gas servicing and boiler replacements to tens of thousands of Council properties. There is nothing in law that would stop them operating in the private sector. So if you or I or any citizen of Kirklees wanted our boiler fixing or servicing why should we go to a company that is associated with one of the Big 6 Energy Suppliers for instance when Kirklees Council could provide that service for the same cost or better and use that money to support local services such as Adult Social Care.  This need not be at the expense of local SMEs. It could well be that Kirklees Building Services works in partnership with local companies to deliver services. We believe the indicated income figures are probably unduly conservative and no one wants to be unduly conservative.

The Coalition Government has caved in to the big housebuilders and as a result homes built will not be ‘Zero carbon homes’ as they are described but still cost over£1000/year to run in energy costs. Question is how do we deal with that lack of ambition from the ‘Greenest Government Ever’. We can set our own standards for homes built on Kirklees land that we own or as a condition of sale on land we sell. That is why the we propose using the internationally recognised ‘passivhaus’ standard for homes on Kirklees land Such homes would have energy bills of less than £100/ year. This would only mean that there was less money going to energy utilities but it would also mean more money going into the local economy.

We think there is merit in reviewing our electoral arrangements at Kirklees. We have General Elections every 5 years, Parish Council Elections every 4 years yet Kirklees Elections 3 out of 4 years. Other principal councils elect every 4 years such as London boroughs. This Council is in a constant state of warfare due to the practically constant electoral cycle operating. That isn’t good for the governance of this Council. It needs reviewing. My own view is that we should aim for an election in 2018 when all seats are up for elections and seek to bring forward the Parish Council elections so we begin working on a common cycle of local elections. There is a financial saving identified here but the benefits to the Council, its governance and the people we serve goes far beyond that.

There are acres of Kirklees owned disused and derelict land and also roofspace on Kirklees owned buildings. This is a resource which can generate not only energy from solar panels we propose a partnership with both companies and communities sharing the benefits of this funding with the Council. The revenue raised will help support local services.

Moving Kirklees mileage rates to HMRC rates was something I was lead to believe happened years ago and I was shocked when it hadn’t. So I am pleased to be able to move this amendment today.

So this is our amendment. We would like to do more. When we proposed an ‘All Party Shared Administration’ for Kirklees Cllr Palfreeman quoted the Fantasy author of Game of Thrones, George R R Martin. The quote he used was ‘Most men would rather deny a hard truth than face it.’  The Fantasy here is not mine it is yours. Closing and relocating Huddersfield Library – somewhere? Fantasy. Another famous quote from George R R Martin is ‘Winter is coming’ meaning hard times ahead. Hard times are coming for Kirklees and for many local councils and the people that we serve.  The hard truth is for the Tories is that if you don’t want the responsibility in these times then don’t ask for the votes.
Posted by Andrew Cooper at 15:51 No comments: 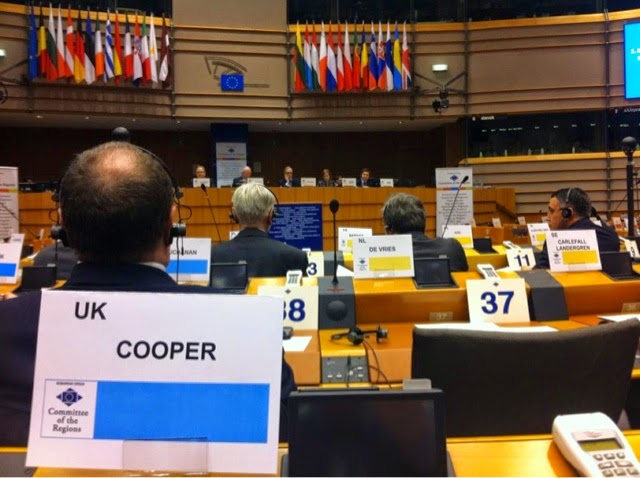 Kirklees Green Party Councillor Andrew Cooper has been appointed to the EU Committee of the Regions as one of the UKs 24 representatives selected from Councils and devolved governments across the UK. The EU body has 353 members representing Local Governments from across the member states of the European Union. The role of the Committee of the Regions is to provide input on the impact of EU policies at the local level. Andrew was the nominee of the Local Government Associations Independent Group of Councillors which represents Councillors elected as Independents and smaller parties such as the Greens. He is the first Green Party Councillor from the UK to be appointed to the Committee of the Regions and the appointment has a five year term.

"It is an exciting challenge and I'm keen to learn more about how we can get as much benefit out of the EU for the people of Kirklees as possible and make a difference to EU policies."

Members of the Committee of the Regions do not get a salary like MEPs and only receive reimbursement for travel and accommodation.

Labels: EU Committee of the Regions

The Green Surge is on! 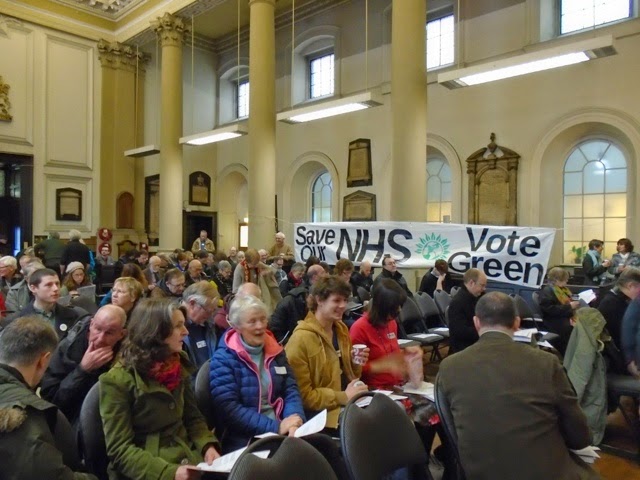 When Caroline Lucas was elected at the last General Election the Green Party in England & Wales had around 12,000 members today it passed 53,000 members. Membership had been rising significantly over the last few years but a combination of factors have made it go through the roof over the last few months. The Green Party's Members Website has a feature on it which shows the current membership for the national, your regional and your local party. A month ago I'd start a train journey and measure the rate of growth from the beginning to the end of the trip and check out the mph (members per hour). On a trip back home from London once we picked up around 700 members over a couple of hours. In terms of membership we passed the Lib Dems and UKIP weeks ago now and are the 3rd largest party in England and Wales. 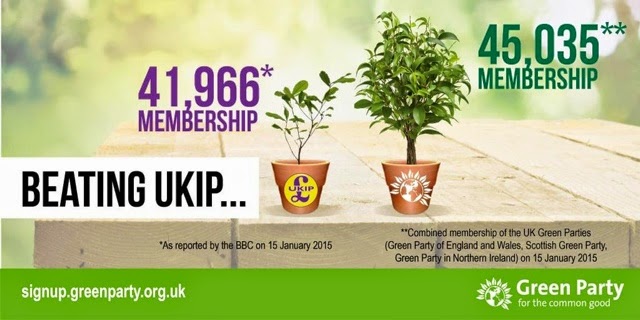 Today it was a Yorkshire and Humber Regional Green Party meeting. Now I've been to a number of these over the years and attendance has varied a bit. Sometimes a few folks round the table but if say 30 turned up it would be regarded as bit of a success. We had around 200 today in Leeds. It was a good job we were doing online booking so we were forewarned and changed the venue and built a programme geared more to a mass audience. We now have over 4400 members in Yorkshire  and the Humber.
So we are now measuring the run up to the General and Local Elections in days and time for steady nerves. We have strong experienced candidates who are challenging for parliamentary seats based on robust community campaigning and now backed up with a stronger national profile. Steady as we go! Posted by Andrew Cooper at 20:47 No comments: