Plastic not so fantastic


At a Kirklees Council Event I attended last week tincluded in the refreshments were bottled water, single use plastic glasses, disposable paper coffee cups, single use plastic tea spoons and little single serving plastic milk cartons. Nobody was setting fire to tyres in the meeting so it wasn't a complete environmental disaster! The Council really do need to be getting the basics right on single use plastic but sadly we are not.

When I asked the Kirklees Cabinet Member Councillor Naheed Mather a question about how Kirklees might address the issue of single use plastic at a recent Council meeting she talked vaguely about the possibility of influencing the use of single use plastics by Take Aways using licensing conditions. If this is possible it would be welcome but when Kirklees hasn't got its own house in order it is very difficult to ask anyone else to.improve their green credentials. The Council needs to 'walk the walk' on cutting back on plastic waste and needs to start providing tap water for events. So far all we have had is talk and no action at all.

So what would an alternative to the refreshment arrangements at Kirklees meetings look like? We could have polycarbonate plastic cups which are reusable and aren't a danger if dropped like glass. Reusable mugs and metal teaspoons could be used. Using milk from milk bottles which are still being used would be a positive move. Tap water could be provided in jugs or in reusable bottles like many organisations already do. Doing the right thing is not rocket science it just requires the right choice to be made and a decision to be taken.

Posted by Andrew Cooper at 15:42 No comments:

What have the last 4 years been like as a Kirklees Councillor?

Busy, non stop, varied and lots and lots of issues and problems to deal with on a daily basis. It’s everything from reporting potholes, planning issues, trying to ensure the Council has robust child protection policies and lots more besides. It’s all about dealing with day to day local community matters. It's great being part of a great team. Myself and the other Green Councillors Andrew Cooper and Julie Stewart-Turner are all different characters but we work together really well and each have our projects and issues that we lead on.
What’s frustrating about being a local Councillor?

We’re not able to solve everything and some things take longer than you would like to solve. Top of the list has to be Newsome Mill. It is privately owned with an overseas owner. We’re in touch with the agent acting on his behalf and we are trying to work with a variety of agencies seeking to get some movement but it is painfully slow.

What are the most common issues people bring to you?

Potholes and dumped rubbish. My mobile phone isn’t full of family snaps it is all broken roads and 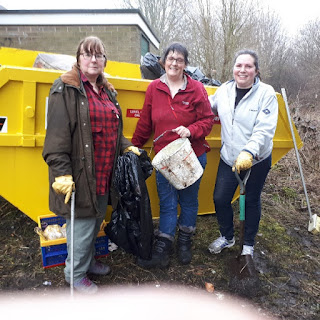 old fridges/sofas etc. Checking to make sure you direct the Council to the right place is essential. We also gather evidence and try to get flytippers prosecuted.

What is different about being a Green Councillor?

We don’t have party bosses or ‘Whips’ telling us how to vote. Most of the time the Green Councillors vote the same way but we are free to vote differently if we wish.  Ultimately people are voting for an individual to represent them and I’d like to think people know my views won’t be overruled by someone higher up in a Party machine. 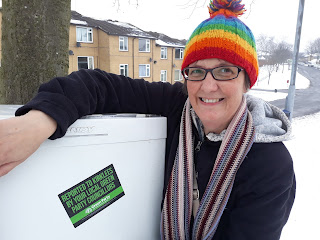 The other thing that is different about us is that we get ‘stuck in’ with community activities. We aren’t all about sitting in meetings. Our New Year’s Day bus service, our clean ups, cleaning Village signs are all examples of us not just talking about local problems but actually doing something about them.  Our support for community activity is very practical and you’re likely to see one of us washing up or putting tables and chairs away. When it comes to working in the community Green Councillors walk the walk as well as talk the talk. 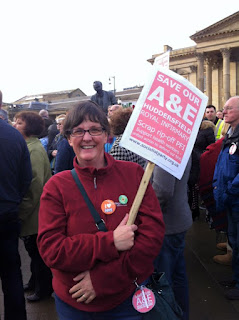 What do you do when you’re not ‘on duty’ as a Councillor?

I’m married with two ‘grown up’ children which keeps me grounded. I’m also involved with local theatre companies helping with costumes as a volunteer. I’m not a total ‘Councillorbot’  7 days a week. 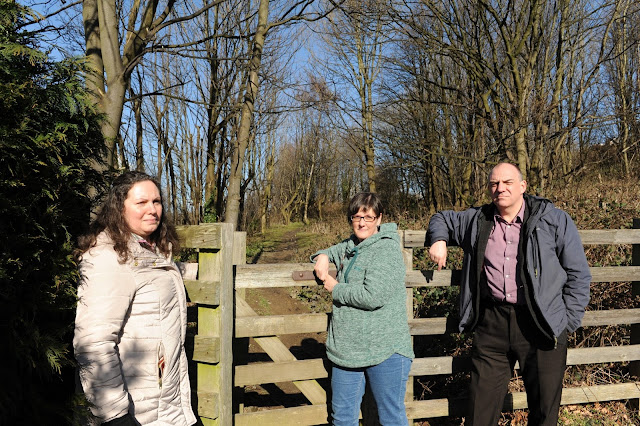 A proposal was due to be submitted to the Kirklees Labour Cabinet for their meeting on the 20th of March to put forward a number of sites for potential housing development across Kirklees.

These sites included the land between Mansion Gardens and Blue Bell Hill in Taylor Hill and the former Stile Common School site at Primrose Hill. They have referred to this as ‘soft market testing’.

Following representations by Green Councillors the item has been withdrawn and will be deferred to a future Cabinet meeting. probably after the Local Elections in May.

Councillor Karen Allison said “The land off Mansion Gardens is a valued amenity space and we opposed its inclusion in the Local Plan and so we opposed it being put forward for potential development now.”

Councillor Andrew Cooper has previously liaised with residents at Malvern Rise and Plane Street over the future of the Stile Common School site. He said, “ I am quite clear that we had an agreement with Kirklees that no further action would occur before there had been consultation with residents over any proposals.

“I would include this ‘soft market testing exercise’ in that agreement. We will continue to keep a close eye on this issue”.

Green Councillors have submitted their objections to the proposals and will keep local people informed of developments.
Posted by Andrew Cooper at 16:47 3 comments:

We don't have Civil Wars in the UK anymore and neither do we have Robber Barons exerting their will over the populace through terror. Instead of all that we will be having Local Elections in May. So though we have a 'sort of' democratic alternative to war and bloodshed that isn't to say that feelings still don't run high during these local contests. It can all get pretty tribal and sometimes just a bit petty. The dodgy graphs, the dubious 'polls', the gamesmanship on the doorstep all plays its part in raising the tensions. In the last Local Elections my principal opponent was telling people on the doorstep that I had 'given up' in the election which certainly raised my hackles. When I confronted this with him he said to me " You have given up I can see the defeat in your eyes". I gave him what I felt was an appropriate response but I have to confess it wasn't really but it did feel right at the time. I behaved better towards him at the Count and didn't say the things I could have said.

So we are now entering 'Election Fever' time when  perspectives can become distorted and wnen some regard winning as the objective and how they get there of secondary importance. Political parties I guess are like human beings  as a whole. From our viewpoint we are the heroes of our own tales. Our mistakes are understandable and are excusable to us but our opponents errors are heinous crimes. This is the way it is in the world of Political Tribalism.

So far for me its been pretty tame stuff. An overenthusiastic opposition Tweeter who thinks that sending me pictures of dumped fridges and assorted rubbish is some sort of reflection of how good or not I and my colleagues are at doing our jobs. A Councillor who thinks me missing my train to the HRI trip to Westminister due to snowy weather is some sort of failing by me as opposed to just bad luck and implies as such on social media. Annoying? Yes. Petty? Certainly but all pretty minor stuff really so far.

So any conclusions? I guess keeping a cool head over the next few weeks. Do the work that is necessary, enjoy the contest and try to exhibit wisdom and dignity at all times. Unlike last time!

Posted by Andrew Cooper at 17:14 No comments:

Green Councillor Karen Allison has come up with a simple initiative to place 'Reported' stickers on large dumped items such as fridges, sofas and mattresses to let people know it has been reported for collection.

"We report a good number of bulky items of waste left by the kerbside, in verges and in the undergrowth to Kirklees. These are reported to us by residents or we see them ourselves as we are going around the area. Due to cuts the Council can take a long time to respond quickly to the many requests we make to have these items removed so people can naturally report the same item a number of times which can cause duplication and confusion. If people see these stickers they will know that it has been reported for collection even if it takes a bit longer than we would all like. If this inititaive in the Newsome Ward is successful we will try to get it adopted more widely across Kirklees hopefully saving time and money."

The stickers have been produced by the Green Party at no public expense.