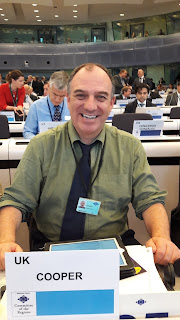 Councillor Andrew Cooper, Rapporteur on the Environmental Implementation Review for the EU Committee of the Regions said

The Opinion requested that  ‘the European Commission to work with relevant national authorities, the European Committee of the Regions, the EU Covenant of Mayors, the Global Covenant of Mayors for Climate and Energy and ICLEI to develop the concept and methodologies for introducing Local and Regionally Determined Contributions, thereby contributing towards Climate Change targets agreed under the COP21 Paris Climate Agreement.’

LDCs and RDCs are a way of filling the emissions reduction gap that needs to be bridged if we are to achieve the targets set in Paris at COP21 of limiting global temperature rises to no more than 1.5% degrees above pre industrial levels. These LDCs and RDCs would form the basis of targets and delivery plans for Local and Regional Governments to lead on the reduction of emissions in their own areas.

The Opinion, as passed at the ENVE Committee, now goes on to a meeting of the Plenary meeting in October where it will be considered by all members of the Committee of the Regions.
Posted by Andrew Cooper at 12:46 No comments: