Golcar By Election - What's pink and hangs from a lamp post?


What's pink, deceptive and hangs on a lamp post? Well it's these pink posters on streets around the Golcar Ward where coincidentally a Council By Election is to be held on November 21st.

The posters say in big bold words 'Stop Labour's Gridlock'. If you look at some really small writing at the top you'll see a line indicating it is part of the Lib Dem election campaign. So though it looks pink it is in fact yellow! It also looks like it is part of some sort of community campaign (which it is not) and there is no indication of what party it represents. It is clearly deceptive, cynical and wholly negative.It is clearly the start of some contrived campaign that the Lib Dems will run during the election to drum up support.

You can imagine when the Lib Dems were dreaming up this idea that they thought it was a really clever thing to do by pretending to run a non partisan community campaign against the party they regard as their principal opponent. The problem for them is that people aren't stupid and they can spot when they are being manipulated. It will backfire on them.

I'm no fan of the Labour Party, but if I am going to criticise them I will do it openly on literature bearing the  name of the Party I represent. If the Lib Dems are going to be so deceptive in their election campaigns why should we trust them if they are elected? Actually we know they can't be trusted in Government with pledge after pledge being broken such as backtracking on no rise in Student Tuition Fees, opposing nuclear energy and privatisation of the NHS.

If they behave so cynically in their election campaigns the they deserve to be treated cynically by the electorate.


The Greens have selected a local music teacher as its candidate for the forthcoming Golcar By-Election. Dan Greenwood is 41 lives in Longwood and owns a business, ‘The Boom Rooms’ based in Milnsbridge which provides rehearsal and recoding facilities to a range of local musicians.

Dan has been a member of the Green Party for 8 years and joined because,

“there was nothing  out there in mainstream politics which appealed to me. The Greens offer a principled alternative that works for social and environmental justice. By Elections are always an opportunity for local people to vote for something different from their usual party allegiances so I’m looking forward to this election campaign”

Dan is a strong supporter of the Red and Green Club in Milnsbridge and has helped organise and performed at a benefit at the club recently. He is a keen cyclist and runner and has recently completed his 50th Park Run at Greenhead Park.

Dan has a music degree from Huddersfield University and is a qualified teacher. He was brought up and educated in Huddersfield and has 3 children who attend local schools.

“it is great to have Dan as our Candidate in this important By-Election with his strong local connections and commitment to the community he lives in. There is a real opportunity here for the people of Golcar , Milnsbridge, Cowlersley and Longwood to reject the local Party machines and to back a Candidate who is independent  of them.  The Greens have a strong track record in Kirklees with 5 Green Party Councillors elected. It would be marvellous to have Dan as our 6th.”

Posted by Andrew Cooper at 15:40 No comments:

When we last discussed the LDF at this Council the Green Group voted against it and at the time we did that on the basis that we would call the Tories bluff on housing numbers. The Conservative Leader Cllr Light maintained that we had total flexibility to determine our own housing numbers and that there was no threat of government intervention to force us to have higher numbers in line with the now supposedly abolished Regional Spatial Strategy. On that basis he proposed a target even lower than that proposed by the Labour administration which was itself way below that required under the Yorkshire and Humber Regional Spatial Strategy. The truth is that the ‘abolished’ RSS is a Zombie policy – dead but somehow still alive with the evidence base for the housing numbers in it somehow valid despite its abolition.
So now we have the Government’s bureaucrat from the Quango the  Planning Inspectorate in Bristol saying Kirklees have not fulfilled the ‘duty to co-operate’ with neighbouring Councils and therefore we are being ‘advised’ to withdraw the Local Development Framework.  When the LDF was being drawn up there were no guidelines on how to fulfil the duty to cooperate so how could the Council comply. It would be like playing Monopoly for the first time without any rules and not being told how many of those houses had to be put on the board.
In reality this has nothing at all to do with the duty to cooperate. Does anyone here really believe that if the housing numbers were in line with the extortionately high figures in the RSS that we would be in this position now? Only apparently the Tories but this is a deception just as the ‘duty to co-operate’ is a diversion.
The truth is that we are being asked today to withdraw this plan by the Governments Planning Inspectorate or they will declare it invalid. It is like Kirklees is standing on the precipice of a cliff with the Planning Inspector with a gun to our head saying ‘jump’. Well I say ‘shoot’ do your worst. It will demonstrate to everyone that there is no true localism in the Planning process and that it is the Conservatives hand in glove with the developers that is the real threat to our countryside.
So what happens if the Government’s Inspector does fulfil his threat to overturn the plan decided by this Council? Is that it? Is it Game Over? It doesn’t have to be because the Government in the form of Eric Pickles as Conservative Communities Minister can himself overturn the Planning Inspectorate. Only last week he overturned the Planning Inspectorate by opposing a solar farm in Sussex that had been approved by the Planning Inspector. It is however possible for Eric Pickles to use his powers for good as well as evil.
The choice today is clear. To withdraw the plan and have even more green space around Kirklees threatened with development OR to hold our nerve with what is by no means a perfect plan but has been decided in a democratic fashion. Our choice is between democracy or the diversion and deception we have seen here from the Conservatives today.
Posted by Andrew Cooper at 15:24 No comments:

The Cr8 Barn at Stirley Farm 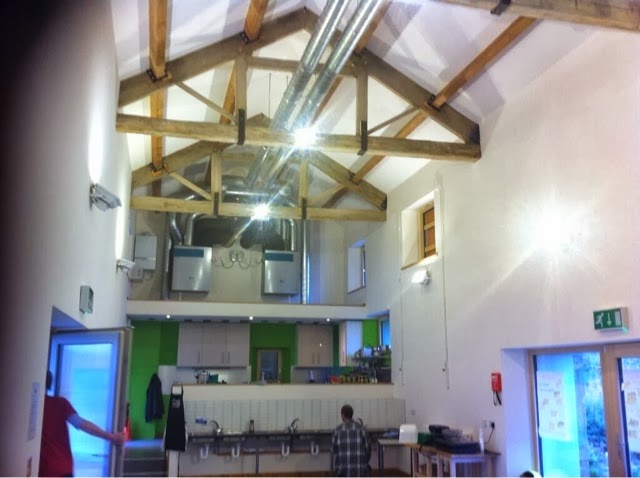 Great new space at the Cr8 Barn at Stirley Farm for supporting the educational work and demonstration sessions at the farm. Really low energy design refurbished to EnerPHit standards. For full details go to the Green Building Company at www.greenbuildingstore.co.uk
Posted by Andrew Cooper at 13:07 1 comment:

A public meeting on ‘Fracking and the clean energy alternative’ will take place in Huddersfield next week. The Green Party event will include speakers from Friends of the Earth and No Dash for Gas as well as Kirklees councillor and Energy spokesperson, Andrew Cooper. The meeting that will be chaired by Councillor Julie Stewart-Turner, will be held at 7pm on Thursday 10th October at Huddersfield Town Hall. The meeting will be an opportunity for members of the public to find out more about the dangers that fracking poses to the environment and dispel some of the misconceptions about its potential impact on energy prices and security. It follows a summer of protest in Balcombe over this unconventional fossil fuel. In the past month high profile figures such as the economist Lord Stern and the ex-Chief Scientific Advisor, Sir David King have expressed concerns about fracking. Sir David King has spoken out about the ‘enormous environmental consequences’ of developing fracking while Lord Stern spoke of the ‘baseless economics’ of the government’s claim that it will reduce energy prices. Fracking will not provide a reduction in energy prices as we have seen in the United States. The US is essentially an isolated market. By contrast, the UK is plugged into an integrated European market where gas is sold to the highest bidder, whether inside or outside the UK. Experts say that even a huge increase in the amount of domestic gas the UK produces would be likely to dent the wholesale gas price. Nor is it clear that it is a ‘green fuel’. Studies have shown that fracking can have a higher global warming impact than coal due to methane emissions. It is also likely that fracking will be a distraction from the primary task which is fully developing the green economy by investing fully in renewable energy and improving energy efficiency. In addition to greenhouse gas emissions, fracking causes environmental damage through water use and water pollution as well as geological disturbance. All are welcome at the meeting to express their views and provide questions for the panel about this important issue about the UK’s energy future
Posted by Andrew Cooper at 10:11 No comments: