Barry Sheerman Labour MP for Huddersfield today called on Gordon Brown to resign. But why? Was it for the continued lack of regulation for the financial sector?, wasting billions on the Trident missile system?, the ongoing tragic farce of Iraq and Afghanistan? or even the Government's pitiful action to address climate change? No it was none of these things it was because the electorate don't 'love' him. 'Sherlock is not going to the toilet' as they say!
In the Huddersfield Examiner he is quoted thus,
"I think over the last two-and-a-half years he hasn't shown that he can engage with the electorate. I think they respect him to a large degree but they have failed to fall in love with him. You need that mixture of love and respect."

If the policies were right, if the economy wasn't in such a mess, if we weren't involved in dubious international conflicts I am sure 'the love and respect' would be easier to come by than it is for Labour. Barry is the archetypal loyalist usually. Blairite before Blair. In policy terms Gordon Brown and Tony Blair couldn't have a better ally but it seems that Labour have had a bit of a foul up in the PR department and Gordon doesn't smile convincingly enough so Barry is getting the knife out Of course in the run up to a General Election it is very convenient for Barry to distance himself from a very unpopular Prime Minister. Given his lack of policy differences with Gordon Brown it is also a wee bit cynical.
Posted by Andrew Cooper at 14:35 No comments:

Dem Fibs from the Lib Dems 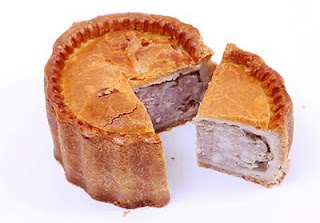 Politics can be a dirty business and the trustworthiness of politicians is probably not rated much higher than second hand car salesman or estate agents. What is needed at this point more than ever is demonstrable honesty by politicians. So when I was passed the latest Lib Dem leaflet from Almondbury I had hoped for better but was to be disappointed. Imagine my astonishment when I read that the Green Party have called for lower insulation standards in council housing than the private housing improved under Warm Zone and that we wish to put concrete insulating render on historic buildings. Lib Dem Leader Kath Pinnock is quoted as saying "only the Greens could think it sensible to destroy our stone heritage buildings at a huge cost to the tax payer". None of this is true, of course. At Full Council as I was leaving the chamber I asked Cllr Pinnock why she had said these things but she refused to talk to me about it and parted swiftly saying "You shouldn't take credit for Warm Zone!". All became clear at this point. The Lib Dems had indeed proposed the Kirklees Warm Zone but not with free insulation. There are any number of Warm Zones up and down the country but without the Green Party amendment making it free it would have less than a third the take up of the current scheme, up to 40'000 homes might never have been insulated under a Lib Dem Warm Zone. The credit, locally and nationally the Greens have received for the free insulation scheme has clearly got up their nose. They usually put a misleading statement in their leaflet like "The Lib Dems introduced Kirklees Warm Zone that provides free insulation for all households". I usually let this pass but this latest leaflet is beyond the pale.

At a meeting on Thursday evening she asked me to tell he if there were any grant schemes to provide solar panels for church buildings. I told her about a suitable grant scheme but not before pointing out the irony of her asking for my advice.

Cllr Kath Pinnock isn't beyond stretching the truth to the limit as this link to the blog on the Yougen website illustrates ;
http://www.yougen.co.uk/blog-entry/1329/Insulation+is+free+for+everyone+in+Kirklees+/

Posted by Andrew Cooper at 15:58 No comments: 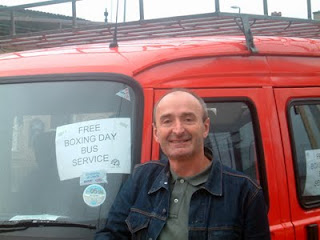 This year marks the 17th year of the Green Party's Christmas Bus Service in Huddersfield. The service is run by volunteer drivers and stewards and was the brainchild of David Taylor a Green Party member from Linthwaite. 17 years ago Bus Services had been cut back with the removal of services on Boxing Day and New Years Day with reduced services on New Years Eve and Christmas Eve. People without a car were forced to either get an expensive taxi or stay at home if they needed to get around. Plenty of people did need to go places, shopping in the sales, going to the football, visiting family and friends in hospital or simply going to work. The service itself started as a protest, to shame the bus companies and Metro to reinstate withdrawn services but as years went by it became a commitment. The service linked Berry Brow, Newsome, Huddersfield and the hospital and was free to users with only donations being requested. An amendment to the Council budget around 8 years ago enabled the hire of buses for a range of voluntary organisations and now there are several services operating. 3 years ago Metro had a rethink and Boxing Day bus services were reinstated but unfortunately not on New Years Day so the volunteer service goes on. There are still areas not served by the Boxing Day service and this year we will be running a service linking Flockton, Grange Moor and Huddersfield for the first time with Green Party members Derek Hardcastle (pictured) and Michelle Atkinson taking the wheel.
Complaining about services being withdrawn is important but if we have learnt anything from this it is not enough to simply protest, real empowerment comes when you take action.
Posted by Andrew Cooper at 11:26 1 comment: