The Restoration? When are the poor going to get their money back?


I got an unsolicited email circular from Lib Dem Leader Nick Clegg today asking me if I wanted a £100 tax cut. He wasn't actually offering it but just asking me if I wanted it. Very much a 'jam tomorrow' offer This apparently would be my reward for coping with the suffering caused by their austerity programme. Nick says,


"Think of it as a workers’ bonus.  The British people have lived with austerity for three years. Your sacrifices are making it possible for us to fix the economy. This is your recovery and you deserve to feel the benefits – without delay."
The message from Government is that we are now turning a corner and that 'growth' and a recovery  is supposedly happening. The problem is for many that this 'good news' is not relevant to them. Many of the people who have suffered the most are those for whom a £100 tax cut is utterly meaningless. The people who have had a bedroom tax imposed or who have lost disability benefits due to the punitive ATOS regime. For many of these people a £100 tax cut will never have any relevance at all. The justification for cutting peoples benefits was supposedly not at all ideological or a 'war on the poor' but because 'we're all in it together'. If that situation has changed and the Lib Dems can offer goodies shouldn't it be the poorest who benefit first?

Of course the right wing media would say its 'our taxes' that pay for these benefits but that ignores the fact that many people have worked and contributed taxes thoughout their lives and that many cannot find work because of their disability or because the work simply isn't there.

With thousands of public sector workers around the country about to become unemployed because of government cuts it seems crazy that the Lib Dems are floating the idea of tax reductions. It has all the hallmarks of a cynical gimmick and is not the behavior you would expect from a responsible party of government but then that is the Liberal Democrats for you.

Posted by Andrew Cooper at 17:08 No comments:

Will Labour save Golcar Library? 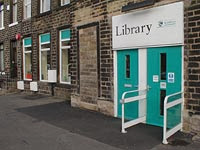 The Labour Candidate in the Golcar By Election is saying he is campaigning to save Golcar Library.

With £129million of Kirklees cuts coming through from the Lib Dem Conservative Government then cuts to local Library services will be back on the agenda. The question Golcar electors need to ask Labour canvassers directly is, "I know that the Labour Candidate says he supports the retention of Golcar Library but does that mean that the Kirklees Labour Party Policy and therefore the Kirklees Labour Cabinet  support saving Golcar Library?"

In my experience Labour Candidates, in particular wards, are sometimes given permission to take a particular stance on an important issue which is not necessarily the same as the policy adopted by Labour on the Council. Its what is left out of election literature which can lead to people being misled.
Posted by Andrew Cooper at 17:29 No comments:

Green Party Energy Spokesperson, Councillor Andrew Cooper has called on MPs to donate the money they have claimed for gas and electricity on second homes to be donated to their local  Food Banks

"The news that 300+ MPs are claiming expenses for gas and electricity costs on their second homes has gone down particularly badly with many people at a time when energy costs are rising by an average of an inflation busting 9%. MPs from Labour, Conservatives and the Lib Dems have all claimed this perk including Huddersfield Labour MP Barry Sheerman and the Tory MP for Dewsbury Simon Reevell . For you and I, we would simply have to pick up the costs of paying for our fuel bills out of our own pockets so its clearly an allowance that needs to be abolished to give MPs a greater appreciation of how difficult it is for many to pay for rising fuel costs. I do believe there is a way that these MPs can redeem themselves in the short term and that is by donating all the money them have claimed for fuel in their second homes to their local Food banks. In this way they can direct the public money they have claimed away from those people who really don’t need it  to the people who need it the most"
Posted by Andrew Cooper at 07:36 No comments: