﻿ ﻿
At the Green Party Conference this year we celebrated our first 40 years of existence. We heard of the founders producing leaflets on hand cranked gestener copiers before offset lithos and photocopiers. The Green Parties that now span the world all came from these initial few dedicated people. In Kirklees we are particularly honoured to have Clive Lord one of the founding members. He first stood for election as the 'People' candidate in one of the 1974 General Elections. Before it was the Green Party it was the Ecology Party and before that simply 'People'. Clive started being joined by others in Leeds around 1980 and had to wait till around till 1985 for the founding of the Green Party in Huddersfield to have other Kirklees based members to work with. Clive is an evangilist for the Citizens Income scheme as an alternative to the Welfare Benefits system. I'm not going to explain it here and anyway Clive has his own Blog here so read that.!

The word 'stalwart' is often used in the context of Clive and every opportunity he gets he is eulogising about the Citizens Income, sometimes at inappropriate times. I strongly suspects he knows this but then he is a man on a mission who is proposing a system which undoubtedly has its benefits. I have no doubt that in a few years time people will develop Clive's pathfinding work and recognise the contribution he has made when the dreadful so called ' Welfare Reformer' Iain Duncan Smith is justly reviled for pushing those on benefits further into misery and destitution.

Posted by Andrew Cooper at 20:03 No comments:

The Armitage Bridge flood wall is in place. When surges of water come down the brook at times of high rainfall the flood waters will be diverted into an adjacent field protecting residents homes. This is a truly community led project which will protect houses down Dean Brook Road from further flooding. Designed by local resident John Lockwood, supported with funding from local architects One 17 AD and also from Armitage Bridge householders and from the Huddersfield Area Committee. This project has 'local solution' written all over it and is evidence if it were needed of the great community spirit that exists within the village.

Last week new Green Party Leader Natalie Bennett visited Huddersfield to look at some of the things we've acheived here in Kirklees, areas we are concerned about and to speak at a public meeting hosted by Huddersfield Young Greens. Natalie is turning out to be a competent a capable Leader for the party and it was good of her to to come up North on what was a freezing day. I didn't vote for Natalie in the Green Party's internal elections for Leader but I'm happy to say she's doing a cracking job. Thanks to Shan Oakes (second place on the Euro List) for the photos.
﻿﻿﻿﻿﻿﻿﻿﻿﻿﻿﻿
﻿﻿﻿﻿﻿﻿﻿﻿﻿﻿﻿

Posted by Andrew Cooper at 19:45 No comments:

I’m just back from my appearance in the Houses of Parliament on the EFRA Select Committee looking into the hot issue of flooding. Since becoming the Chair of the Local Government Association’s Inland Flood Risk Working Group we have wrestled with many aspects of central and local government approaches to the issue just as some of the worst flooding events ever experienced were hitting towns and vilages up and down the country. In all around 7,800 homes were flooded and some more than once.
One of the first issues raised by the Select Committee's Chair Ann Mcintosh MP was whether or not the funding provided by government was meeting the need for flood prevention measures. I pointed out the fact that the additional £120 million provided by government for schemes was a ‘drop in the ocean’ and that the flood alleviation scheme for Runnymede alone would cost around £200million. I was asked about the effectiveness of the Bellwin scheme - central government funding for flood hit councils. After a flood event such as hit Calderdale last year was not unusual to see government ministers giving interviews mentioning how central government emergency funds will be brought in under the Bellwin scheme to help out local Councils. To qualify for the scheme the damage must cost more than around 2% of a Councils annual budget. Millions of pounds worth of funds have to be incurred by Councils before they can be considered for Bellwin assistance. There are also an awful lot of items not covered by the Bellwin scheme such as damage to rads and infratructure. Calderdale incurred costs of around £2.5million following the Hebden Bridge/Todmorden Floods but under the Bellwin formula only qualified for around £80k. I was also probed about how Partnership funding was working. This is where central government funding for flood defences is matched against other sources such as private and Council funding. In many places there are no large companies to put their hand in their pocket to cover the cost of defences so often costs can fall on cash strapped councils or private householders. It is possible that some worthy schemes where there is a need for flood defences might fail due to lack of support funding and less worthy schemes are prioritised.
After making these points one of the MP’s on the Committee (Conservative I’m guessing) asked me what I would cut to pay for flood defences. As he was asking (and I was trying to be helpful) I suggested cutting the billions of pounds being allocated to HS2 and Trident. He didn’t probe deeper. Maybe he agreed.

Here's a link to video footage of the meeting

A stone lintel goes in next week but here's progress to date. Great to see this happening. 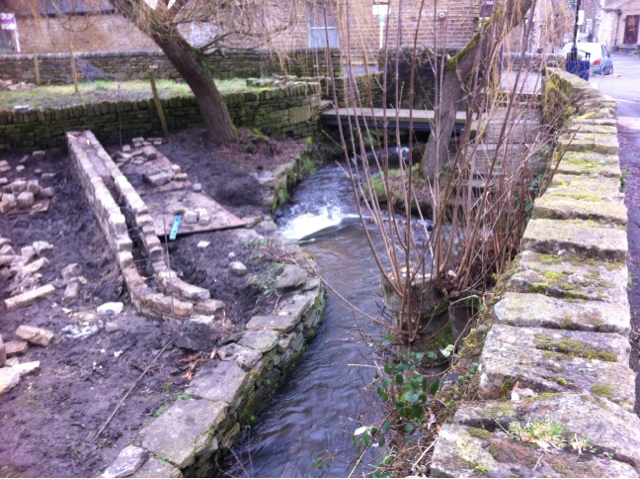 Posted by Andrew Cooper at 10:15 No comments: