"I could do your job!" - The death of deference

One thing I've always been uncomfortable with is deference. I don't like the hierarchical nature of our country. It is what makes me an instinctive Republican. I've never been a big fan of authority in any form. Living in a country where we defer to people who have privilege and position by accident of birth makes me feel like I am living in some sort of bizarre Ruritanian fantasy kingdom as opposed to the modern European democracy that I wish we were but just aren't.

I've never believed that people in managerial or political positions are inherently in any way superior and I have, what I regard, as a healthy disrespect for authority. It's one of the things that got me involved in politics in the first place. The need to take on the pompous, the bullies and those who believe they have a right to the positions they hold or those who believe that no one has a legitimate democratic right to challenge them.  When I was first elected and many years afterwards I inwardly winced when Council officers referred to me as 'Councillor' and I tried to steer them in the 'Call me Andrew' direction. Now I recognise that Council Officers referring to me as 'Councillor' is a way of them emphasising their professional detachment and being clear about our respective roles which is not the same as the deference I so despise. I live with the title, I guess I've earn't it.

The general populace has caught up and deference to politicians is not what it was in years gone by. This has got to be a good thing. It comes as a bit of a shock after 18 or so years on the Council to find that some people regard you as part of 'the establishment'. So one Saturday night a few weeks ago  I'm wandering through Huddersfield Bus Station and this drunken guy shouts across at me  "Hey! you're Andrew Cooper, my MP. I could do your job but I bet you couldn't do mine!", It was on the tip of my tongue to come out with some witty remark referencing what I thought his job might be but I decided instead to just give him a cheery wave and say 'Bye!'. Of course, and unfortunately, I wasn't his MP and a Councillor gets about a seventh of the salary of an MP. I also guess that he only had the faintest idea of what I actually did as a Councillor (or what an MP did come to that) and that to him it would be something along the lines of just saying whatever came into my head in a meeting and who can't do that for goodness sake?
Just as a drink or two can make people bold so can social media and I often read, whimsically, the inaccurate comments made about me, or my role, on the Huddersfield Examiner Facebook page. The latest was someone who asserted that I could claim back my energy bills in expenses from the Council ' I'm afraid not matey!' I didn't bother trying to correct him. Maybe I should have done.

So has the lack of deference to politicians gone too far? I don't think so and politicians can worry too much about what some guy posts (it usually is a guy) on social media about them. We've just got to a certain extent 'suck it up'. Every now and again someone will cross a line but generally we've got to live with it or take them on as you see fit. A bit of a thick skin can be helpful to people in the public eye.

Deference and the love of positions for their own sake is not dead. For some politicians the title as opposed the role, and the deference/respect that comes with those positions, remains a prime motivator. It concerns me greatly because a desire for a position is not generally a good measure of someone's suitability for that position. If that position is achieved by patronage to secure the deference of colleagues then that concerns me even more. So though some regard me as part of 'the establishment' these days I will continue to challenge those in power and those who seek it for the wrong reasons.
I've never sought deference and I won't be providing it to anyone else any day soon.
Posted by Andrew Cooper at 17:55 3 comments:

The whole of Kirklees is a Smoke Control Area This means that if you burn fuel that gives off smoke you could be fined up to £1000. The original Clean Air Act was introduced in 1956 as a way of dealing with the epidemic in respiratory conditions arising from people living  in an environment with thousands of chimneys belching out smoke. Most homes were heated primarily by housecoal, which is not smoke free. The introduction of smokeless coal and more homes getting connected to gas meant that air quality was vastly improved. The whole of Kirklees is a Smoke Control Area which means that it is effectively illegal to burn housecoal anywhere in the district.So if it is illegal to burn it why can you still buy it? You go to petrol stations, hardware stores and solid fuel merchants and they stock it and they presumably sell it. The people who buy it I'm guessing don't just stockpile it to look nice for display purposes only. I can't really imagine someone proudly showing their visitors their huge bile of the black stuff saying "Come and have a look at my heritage coal which I can't burn. Looks great doesn't it! Really black and dirty." So tonnes and tonnes of this stuff flies off the forecourts and coal yards each year and adds to the atmospheric soup of pollution we all breathe in. So one idea I'm exploring with Kirklees Legal officers is whether we can establish a local byelaw to ban the stuff. It should be uncontroversial. Why are people allowed to buy a fuel they can't burn anyway?  I remember when smokeless fuel was a bit rubbish and difficult to light compared with housecoal. Now smokeless fuel is a better product and some even boasts it contains 50% renewable components like Ecocoal. Smokeless or not,  coal is bad for our global environment in terms of carbon emissions but dealing with the immediate health impacts of housecoal by restricting it's sale should be something we had done years ago so lets see if we can do it.

What happens next having advocated a ban on the sale of housecoal is a chorus of "What about you greenie types and your woodburners? That may be renewable but it gives off smoke?" This can be true if you have a  poor wood burner and fuel with a high moisture content but it doesn't have to be like that. Kiln dried fuel and DEFRA approved wood burners/boilers can ensure smoke is kept to a miminum. The other benefit is that you can help support local employment by buying a DEFRA approved Dunsley Yorkshire Boiler like mine, manufactured in Holmfirth .No I'm not on commission!
Posted by Andrew Cooper at 14:42 1 comment: 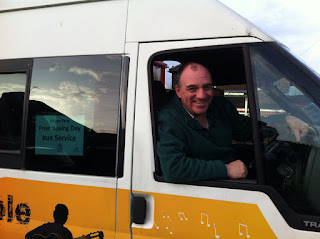 Huddersfield Greens are marking 25 years of the volunteer buses they have been running over the Christmas Holidays since 1992. Councillor Andrew Cooper who is a volunteer driver said,

“I remember the first one we ran in 1992 which we ran as a protest against the removal of services over the holiday period. Since then some services have been resumed in some areas in recent years on Boxing Day” 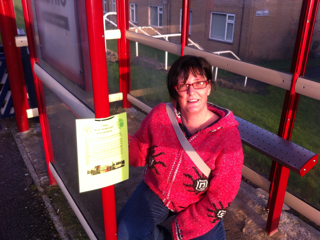 routine. At this time of year when there are limited public transport services taxi journeys can be expensive particularly from rural villages so people who use the minibus we operate really do value it. We put timetables on bus stops and in local shops so people are aware of our schedule. The service is free to use but donations towards fuel costs are always welcome. A copy of our timetable is below.”

The minibus is now provided by Kirklees Council through Commodle which provides a wide range of Council equipment for community activities.

The 2 services provided are on Boxing Day and New Year’s Day. On Boxing Day a service connects Grange, Moor and Flockton with Huddersfield Town Centre and on New Years Day the service runs from Berry Brow,Newsome into Town and on the Huddersfield Royal Infirmary.” 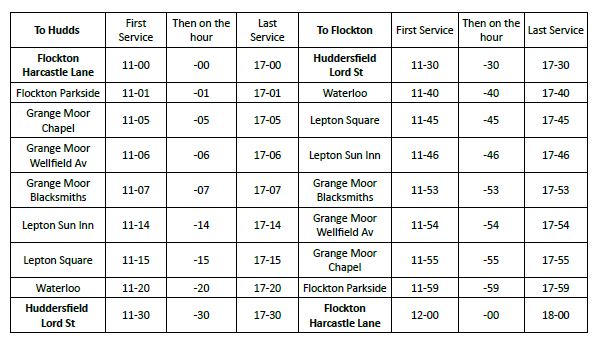 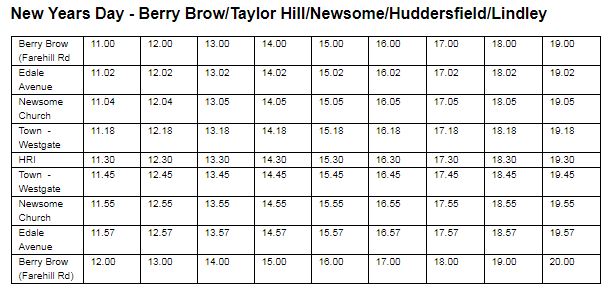 Posted by Andrew Cooper at 11:20 No comments: