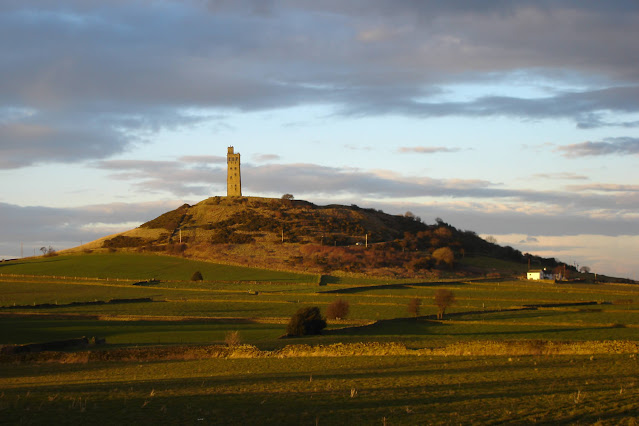 We the undersigned councillors request that you call in Application 2018/93591 that was passed by Kirklees MBC on the 28th October 2020 and we wish to support the call in by Huddersfield Civic Society.

Castle Hill is a significant landmark of special merit in Kirklees, the whole monument and its surrounds are a scheduled ancient monument sited in the Green Belt.  The site is visible for miles around and is an iconic landmark of national importance and any development here would have a detrimental visual impact.

We support Historic England’s recognition that this hilltop fort is a rare and important asset of local, regional and national importance.

The majority of the community, who submitted comments were against the proposal and we as councillors instantly had emails and calls from residents questioning how and why the application was approved given the evidence provided.  However, this was not reflected in the verbal submission by the officer and the report, while acknowledging the responses, somehow chose to focus on the few that met the recommendation’s view.

The Council and  the Strategic Planning Committee (SPC) needs to be impartial when it comes to such highly sensitive applications that will affect the community for decades to come.  This unfortunately didn’t appear to happen with one of the Councillors on the SPC reading from a prepared script (visible on the Teams virtual meeting and another stating that she was speaking for the silent majority who might want a development on Castle Hill.  Where was the evidence for such a statement and what happened to SPC members being impartial when making decisions?

This is an application to build a commercial restaurant/café/bar with six guest bedrooms in the middle of Green Belt within the curtilage of the Scheduled Ancient Monument and adjacent to a grade II listed building (Victoria Tower).

We believe the Kirklees planning process was flawed and the evidence fails the test of Green Belt and Heritage protection.

The document that was presented to the SPC (ref. 2018/93591) demonstrated there was clearly no robust evidence to support the approval and opinions given in support of approval of the application were thin and not evidenced.

The same document also demonstrated there was a) significant opposition to the application and b) could not demonstrate how the evidence supported an approval.

There are a number of concerns we have about the processes and procedures the planning team and Strategic Planning Committee carried out.

We aware of the Huddersfield Civic Society’s objections and concur with their evaluations.

Our main concerns are as follows:

This site is in Green Belt and the benefits proposed by the applicant have not been quantified or proven and as such, claims by the planning department in the Council that ‘very special circumstances’ (NPPF cl 1..) have been met and properly evidenced to make such claims.

The Council planning department are ignoring the Council Local Plan Policy requirements without clear and robust evidence of why such activities can be ignored.  This particularly comes to the fore with Local Plan LP13 and LP16 which require a sequential test of any town centre uses outside of the defined centre boundaries. There was no evidence that such tests had been carried out and this was admitted in the officer’s verbal summary to the SPC.  In SPC Agenda pack of the 28/10/2020 item 9 page 61 paragraph 10.15 confirms that LP13 and LP16 requirements to carry out sequential tests and an impact assessment were not carried out. Again what is the evidence that these requirements were unnecessary?  Given the town centre and rural communities are already suffering economic harm from COVID-19, we can’t understand how such a test, had it been carried out, would have met such a test as to allow a town centre development at the heart of the site.  There are already amenities in the town centre and rural communities offered in the application under-utilized, so how does this outweigh the harm caused in Green Belt.

The evidence submitted by the applicant was generic with little detail to make judgements against.  The Council report clearly demonstrates that the NPPF conditions for very special circumstances had not been demonstrated and yet the officers highlighted a few selective clauses and statements to reinforce a predetermined recommendation to approve the application of an inappropriate development in the Green Belt.

Paragraph 145 of the NPPF states that the construction of new buildings is inappropriate in the Green Belt, and paragraph 143 states that inappropriate development is, by definition, harmful to the Green Belt and should not be approved except in ‘very special circumstances’. We do not believe that allowing the public limited access to use the toilets within a commercial venture meets this criteria.

Historic England as we understand maintain an objection to allowing construction on Castle Hill which will substantially harm a heritage asset of national importance. The size and nature of the proposed development makes clear that servicing heritage visitors is not its primary function.

In addition to the above issues raised re the Green Belt we would highlight similar serious concerns with regards to NPPF clauses 193, 194 and 196 which we believe have not shown the benefits outweighing the serious harm.

We believe that the written report determines that application should be rejected, however, a few statements made were selected to carry more weight than the evidence provides. The recommendation, in our view, flies in the face of the evidence.

The processes and procedures within the planning system appear to be biased towards accepting a recommendation that is not evidenced adequately. For instance, it was stated that this is a new application and yet it is an existing application, which has not been approved in the past and yet, with little additional information (except a new design, with even more impact on the heritage) has now been approved.

Three of the SPC members recognised and stated that there was insufficient evidence to make a planning decision on and yet the recommendation and subsequent vote was to approve the application, without any consideration of the consequences of failure of such a business on the site. To date there has been no business plan submitted that we are aware of.

The reliance on planning conditions being set after approval for such a significant site demonstrates to our minds that the applicant’s documentation has not covered all the bases prior to approval.  Significant issues such as drainage, transport and security issues, that all could have a detrimental effect on the public benefit are being left until after the approval is given and s106 conditions if not robust and fully fulfilled will leave the site in a significantly poor/damaged state.

It would appear that SPC members were coming to the meeting as if the decision had already been made, particularly evidenced with pre-written statements that were read out.

The information verbally summarising the report were heavily biased to the recommendation to the point that consultees views that were not in favour of approval were effectively ignored and a few that appeared favourable were given more weight.

In conclusion we believe the recommendation to approve this development flies in the face of the evidence or lack thereof and the strong public interest warrant the close examination and inspection of this application.

Posted by Andrew Cooper at 20:17 No comments: