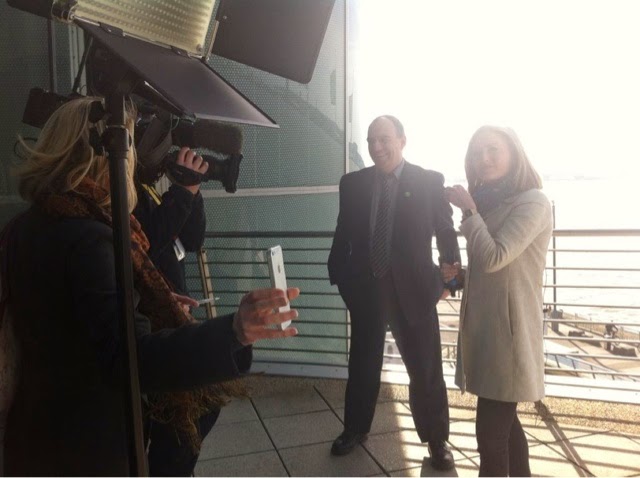 Green Party Spring Conference in Liverpool was huge. Well over a thousand delegates and around 400 journalists had booked for the event. Though some of them seem to have written the stories before the event e.g. The Daily Telegraph.

I was with Natalie Bennett as she approached the Conference to register with about a dozen TV cameras in her face as she attempted to get in the building with journos firing off the expected questions that were designed to intimidate. It really was media mayhem and it was a relief to enter the registration hall to spontaneous applause for Natalie as she went to get her delegate badge.

My media interview was on a little later with BBC News 24 with my Energy Spokesperson hat on. "Why does the Green Party want to ban all cars?" Asked the Interviewer. "We don't!" It transpired that in the programme there was an amendment to Green Party policy with a misleading title hence the question. Seemed to bat that one off OK! The best and most definitive answer I gave to a question at Conference was from a delegate who asked me "Do you know where I can find Andrew Cooper?"

The principal speeches were all good in different ways. Natalie's Leaders speech delivered the key messages we needed to get across very well. Caroline Lucas was passionate and engaging the audience as she always does. The Deputy Leaders definitely delivered. Amelia Womack  was on form but the real and unexpected revelation for me was Shahrar Ali our Male Deputy Leader who gave a cracking speech on climate change full of humour and anger. Just good really.

Spirits seemed pretty high at the Conference and some of the fringe meetings seemed about as well attended as some of our Conferences have been in past years.

Lots more to say but lots to do at the moment!