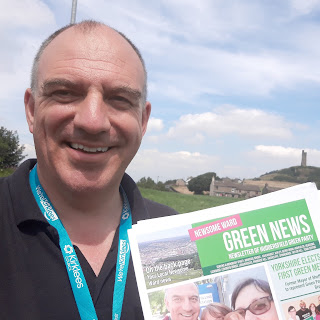 Andrew has been elected and re-elected to the Newsome Ward of Kirklees six times and  has notched up over 20 years service on the Council. He has taken up hundreds of local issues and concerns in his years as a Councillor and was responsible for making the Kirklees Warm Zone scheme free to all householders ensuring thousands of homes in Huddersfield were warmer and easier to heat. He now has a role providing advice and assistance to over 300 Green Party Councillors around the country.

At the national level Andrew is the Green Party’s Energy Spokesperson and has influenced the UN global climate talks by getting more recognition for the importance of the work of Local and Regional Authorities in addressing Climate Change.

On being selected Andrew said,

“Huddersfield is crying out for change. We need a fresh start for our town that provides a voice that is independent of the old parties that have failed us all for far too long. I’ve lived worked and represented people in Huddersfield for many years. It’s a town I love and it would be a huge honour to represent Huddersfield in Parliament, to be a voice that is dealing with peoples everyday problems but also looking at ways to address the climate crisis we all face.”

“I’m looking forward to the campaign. I want to see as many people as I possibly can over the coming weeks and to show people that there is a way we can aspire to a politics that is better than the one we have all endured for so long.”