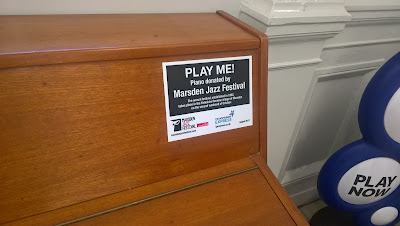 Really pleased my idea to get a public use piano for Huddersfield Railway Station has become a reality.

The piano has been donated by Chas Ball who chairs the Board of Marsden Jazz Festival and was the Green Party Candidate for Colne Valley in the 2015 General Election. It was a conversation with him and the Huddersfield Station Manager Andrew Croughan of Transpennine that made this happen.

I've seen pianos for use by commuters being played at Sheffield, Leeds and London St Pancras Stations and I was impressed by how they gave a showcase for local talent and entertained people on thier way to and from work. Huddersfield is a musical town with the Contemporary Music Festival, the Mrs Sunderland Music Competition and a plethora of music groups from a thriving Youth Music culture to well established groups such as Huddersfield Choral Society. Having a piano in one of the busiest railway stations in Yorkshire will provide entertainment  to thousands of travellers and be a new element to the musical culture of our Town.

Talking to the Station staff it really adds something to their day. They see a commuter walk towards the piano and wonder what tune might appear. One morning during the busy commute to work someone sat down and played the theme to 'The Walking Dead'. I guess there was some irony there.

I'm now thinking about other places in Huddersfield we might have public use pianos. Any ideas?