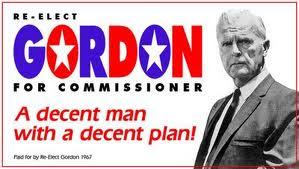 When trying to think of a suitable frame of reference for what a Police Commissioner might be like you have to go to the USA where they have them already. I only know of one example of someone in such a position and that is of course Commissioner Gordon from Gotham City. I am not thinking of the Gary Oldman version here but the hapless bloke who played him in the 60s version of Batman starring Adam West. Gotham City was obviously starved of public funding as every time there was any sort of crisis at all (usually involving Mr Freeze, Catwoman, the Joker etc) Commissioner Gordon and his Chief O'Hara would be straight on the blower to some masked vigilante to get him to help them out. Has the Gotham City Police Department actually solved any of its own crimes without having to outsource/commission someone else to sort out the bad guys and probably at a premium. Bruce Wayne isn't an eccentric millionaire for nothing I'm sure. So for the Police Commissioner system of governance to have any chance of working we are going to need a West Yorkshire equivalent to Bruce Wayne to supplement a cash starved police force. An eccentric millionaire, a 'do gooder' with a penchant for fast cars and a flamboyant taste in costumes. A reasonable runner as well and a former wrestler who might be able to hold his own in a scrap would be handy. There are just two problems. The chap who fits the 'Bruce Wayne' profile died last year and the other problem is that he was Jimmy Saville.